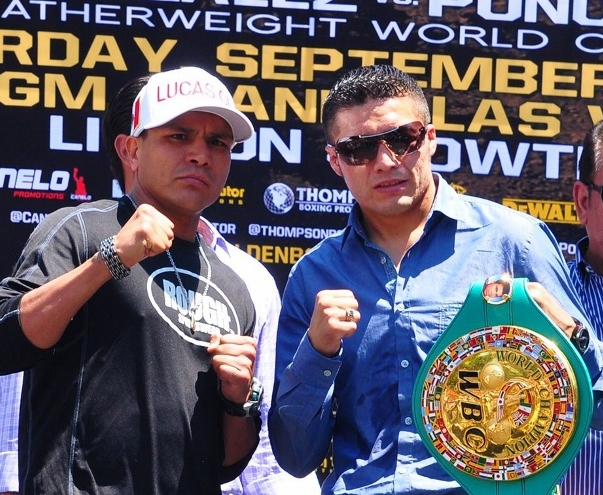 I think the best way to describe the action packed weekend is to quote The Joker in The Dark Knight: HERE… WE… GO. I think most people are counting down the minutes to Sergio Martinez’s showdown with WBC Middleweight Champion Julio Cesar Chavez Jr. The main-event offers fans the kind of drama combined with the kind of expected fireworks worthy of a big time prizefight.

As big as that fight is, there are other fights and fighters this weekend that add to the pageantry of the weekend itself. With Guillermo Rigondeaux now back on the card (for now) squaring off against once beaten Robert Marroquin it deepens the card a bit more.

What I love about this weekend so much is that once the PPV is over the DVR recording of Showtime’s Saul “Canelo” Alvarez-Josesito Lopez will immediately follow. Though most consider Alvarez-Lopez to be the less superior main-event of the weekend, the overall card is leaps and bounds better than the HBO PPV.

In the opener you will see “million-punches-a-fight” Leo Santa Cruz against his toughest test to date Eric Morel for Santa Cruz’s IBF bantamweight title. Although ThaBoxingVoice.com’s Victor Salazar doesn’t think much of Morel as an opponent (and he’s partially right) it is still a significant fight for Santa Cruz, who I believe is the rare type of fighter that can make entertaining scraps regardless of opponent.

The Marcos Maidana vs. Jesus Soto Karass could be a tremendous fight, I personally believe that their styles will make a great fight and it’s a good fight for both men. Maidana is coming off of a loss at 147 against Devon Alexander and many feel that he isn’t adaptable to the higher weight class. Soto Karass has fought his last 3 fights in the junior middleweight division, but in his last fight he came in at 151. So for a guy who has to come down in weight, fighting a guy who may not be at his best coming up seems like a reasonable request for the both of them.

This brings me to the co-feature of the Alvarez-Lopez card and that is a matchup between hardnosed Mexican fighters Jhonny Gonzalez and Daniel Ponce De Leon. While the focus of many will be on Martinez-Chavez the Gonzalez-De Leon fight has the potential to steal the show Saturday. Amongst all the fights this weekend Gonzalez-De Leon, in my opinion, has the makings of a real war.

Gonzalez is coming in with a 12 fight winning streak and looking to make his 5th consecutive successful title defense. De Leon is 2-2 in his last 4 fights, but every one of his 4 losses came against top quality opponents, in fact many believe he deserved to get the nod against Adrian Broner in their March 2011 bout.

While many believe De Leon isn’t the fighter he once was, he is still a dangerous action fighter capable of making tough fights for his opponents. Gonzalez is a busy fighter whose relentlessness has no bounds, his gaudy KO ratio of 76% is made up of 45 knockouts to his 52 wins. De Leon has an equally impressive KO ratio of 74%, containing 35 knockouts in 43 wins. These 2 fighters have a combined 95 wins together.

Gonzalez has to be considered the favorite in the fight, but make no mistake about it because the likelihood of a winner doesn’t determine the potential for war. Even if De Leon’s chances of having his hand raised in victory seem less likely, the safest bet in the fight has to be the probability of fireworks.

The notion that Gonzalez-De Leon being the best fight of the weekend isn’t a stretch of the imagination and it certainly isn’t an opinion represented by me alone. Many insiders have been saying for months now that this fight could be the best in terms of action.

I’ve been behind this notion for a while, but it was actually 13th Round radio co-host “Eric Masters” who made the point over the airwaves months back, suggesting that the hardcore fans aren’t letting this fight go unnoticed.

With Golden Boy offering a $100K bonus for the knockout of the night, it’s safe to say that the extra incentive could add to an already promising fight. The fact that Gonzalez‘s purse is a mere $40,000 means he may be trying to bank off the bonus, which could either mean he succeeds in his aggression or gets reckless enough in the fight to

There are 9 televised fights total between the HBO PPV and the Showtime telecast, of all the fight picks people are going to make this weekend picking Gonzalez-De Leon as a must-see fight is the safest pick of all.

It’s fitting that this fight will take place on the Mexico Independence Day weekend because it’s a symbolism fight that represents the essence of some of the most epic Mexican wars to date. This fight is an amazing match up no matter what day it fell on, but with the ambiance provided by the date this may be one of those nights/fights where all the stars align perfectly.