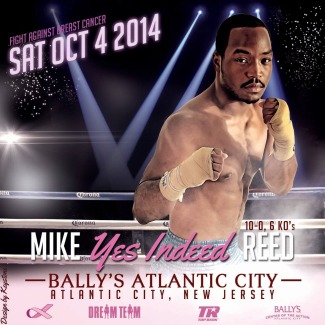 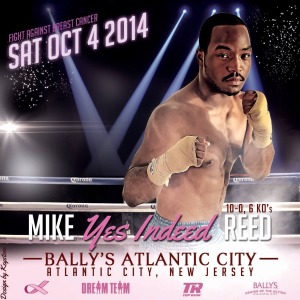 WASHINGTON, D.C., U.S.A. – Twenty-one year old light welterweight professional boxer, Mike “Yes Indeed” Reed (Washington, D.C./pro record: 10-0, 6 KOs), returns to the ring on Saturday, October 4, 2014, at Bally’s in Atlantic City, New Jersey. On the fight card, promoted by Top Rank, Reed will face Juan Manuel Montiel (Mexico City, Mexico/pro record: 7-6-3, 2 KOs) in a six-round bout. This is Reed’s first fight since he signed with Top Rank in July, 2014. The main event will feature New Jersey’s Glen Tapia against Lithuania’s Donatas Bondorovas.
Michael “Buck” Pinson, Reed’s father, manager and trainer, talked about the upcoming fight on October 4. “Our opponent Montiel is a tough guy who went the distance with several undefeated fighters, and had draws with Carlos Molina and David Rodela. Even though he has six losses, I think he will give Mike the rounds he needs at this stage of his career. We appreciate that valuable fight experience that Montiel brings to the table. Top Rank knows the boxing business, and they are going to select the proper opponents that will help guide my son to a world title. Fighting at home or on the road isn’t a problem. At one time, Mike was one of the top amateurs, so we’ve traveled and competed all over the country.”
Pinson talked about training camp for this fight. He said, “At this point, camp is winding down, and Michael has put in the necessary work and is ready to fight. Training camp is the hard part, fighting is when boxing becomes fun. Michael’s job is to put the work in the gym and do whatever schoolwork is necessary for college. It’s that simple. We don’t worry about opponents getting switched or guys pulling out of a fight. I understand that happens sometimes in this sport, so we just continue doing our part to be mentally and physically prepared for whatever our opposition may bring to the fight in Atlantic City.”
Mike Reed talked about returning to Atlantic City for his Top Rank debut against Montiel. He said, “Juan Manuel Montiel is a durable opponent who has fought against very tough opposition. He went the distance in most of his fights and he is battle tested, with sixteen fights of pro experience. My goals for this fight are to continue my growth as a professional fighter while continuing to build my fan base outside of the Washington, D.C. area. I plan to show my versatility and many different aspects of my fight game. This is my Top Rank debut, and that means a lot. It is awesome to have the security of one of the top boxing promoters to help guide my career to a world title. Also, it shows the kids in the gym that hard work helps you achieve anything that you set your mind to accomplish.”
Reed continued, “This is our second consecutive fight in Atlantic City for Team Reed. Obviously, we do have to travel away from home, but the reception that we received from the crowd in Atlantic City at our last fight was remarkable. The fans that were cheering for me at Bally’s made me feel as if I was fighting in my hometown. After the fight was over, I was walking around in the hotel’s casino, and I would hear people yell, ‘Yes Indeed!’ That was really cool.”
Reed discussed the talented light welterweight division. He said, “The 140 lb division is loaded with talent, but three names stand out to me and they are Lamont Peterson, Adrien Broner, and Terence Crawford. I have watched Lamont since I started boxing, and I’ve personally witnessed his transformation from him being an open fighter to being a world champion. When I first met Adrien in 2009, he told me that he was going to be a world champion. I watched how he trained and worked towards his goal, refusing to stop until he was a champion.  I see a lot of similarities between Crawford and myself, even down to the way he carries himself inside and outside of the ring. He is a crafty and skillful fighter, and I believe he will be around for a long time. I work hard so I can be mentioned with those guys.”
Reed is thankful for all the support he has received from his fans and the media. “After every interview or statement given, I always thank those who helped me get to this point. I’m grateful for every person who told a neighbor about me, and everyone who bought a ticket to attend one of my fights. Every little bit helps and it’s truly appreciated. Without you all, I wouldn’t where I am at this point in my career.  Thank you to all the media who constantly encourage me and support my career.”
Tickets for Reed’s October 4 Top Rank card at Bally’s in Atlantic City, priced at $50 and $75, can be purchased by phone (800) 736 1420 or online at ticketmaster.com.
Tweet