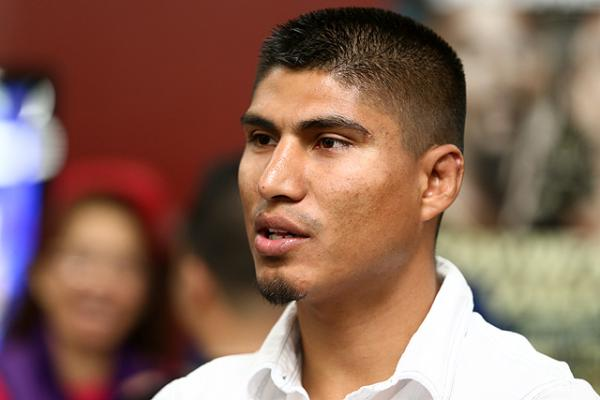 Mikey Garcia arrives at the Mayweather Boxing Camp, despite allegations of spying on his teammate’s next opponent.

“I’m taking notes bro; undercover.” Mikey Garcia says, half joking, when asked what he is doing here. Mikey Garcia denies the allegations and claims he is there to enjoy Floyd Mayweather’s legendary status.

Mikey Garcia, Top Rank fighter and WBO Super Featherweight Champion, is expecting two fights of his own this year and would like to move up in weight to the Light Weight limit of 135 lbs.  Mikey Garcia, in the midst of legal negotiations with his promotional company Top Rank, accepts the claims he’d been asked to fight Manny Pacquiao in the near future at 147 lbs.

“Yeah, I’d be interested in fighting him.”  However, he insists, “I never called him out. It’s not going to happen.”  Mike Garcia goes on to say, “I continue to work with Top Rank, trying to renegotiate a contract. There are some interesting fights with them, and it would be interesting to see what happens. I haven’t talked to anybody, [Golden Boy Promotions, Al Hayman, Mayweather Promotions] everyone has been speculating, but that’s not true.” “We’re working with Top Rank and trying to renegotiate a contract, that’s it.” “We want to move up to the lightweight limit of 135 lbs; we want to try that division and see how comfortable I am.”