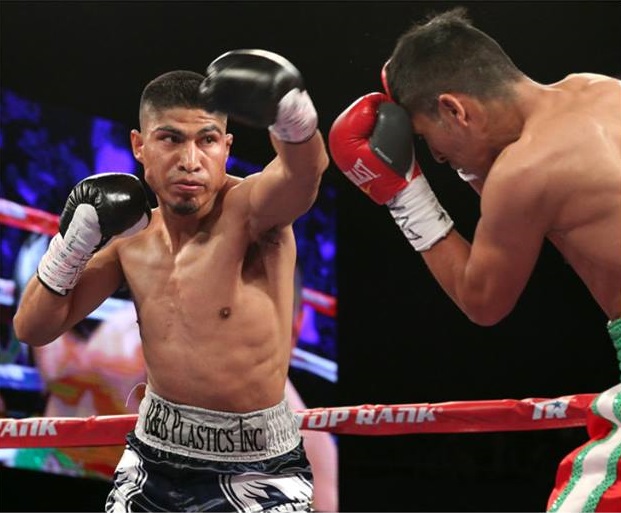 Burgos did well in the first round while consistently working the jab but towards the end of the round Garcia began to press Burgos and throw combos. Burgos continued to look well in the second round when Garcia left his chin exposed and was caught by a counter left hook which made Garcia’s knees buckle.

The tide began to turn in the third round when Garcia caught Burgos with a right that could have put a lesser fighter down and out which caused Burgos to hold on for quite some time. Garcia continued his assault in the fourth round rattling Burgos’ brain with a straight right.

After the fourth round Burgos became very hesitant to throw any punches which would later result in the crowd booing.

Garcia began teeing off on Burgos in the seventh which would cause some sense of urgency from Burgos in the eight as he began to take more risks.

Garcia would continue to control the fight as Burgos would not throw any punches and the fight was left in the judges hands.

In the opening televised bout Bryant Jennings made his HBO debut with a tenth round stoppage over Artur Szpilka.

Both fighters began to throw hard punches in the first round but the pace would slow in the second.

The action would increase in the fourth round and Jennings would begin to land the left hook clearly in the fifth.

The direction of the fight became evident when Jennings would send his opponent down to a knee with a hard body shot.

Both fighters came out strong in the seventh, swinging for the fences but Szpilka is unable to land clean shots.

In the final round Szplika made a last stand but all of that ended when he went down from a hook in round ten that almost sent him through the ropes. The action continued for just a few seconds as Jennings jumped on his opponent and began teeing off as the referee stopped the fight at 2:20 of round ten to give Jennings the TKO victory.