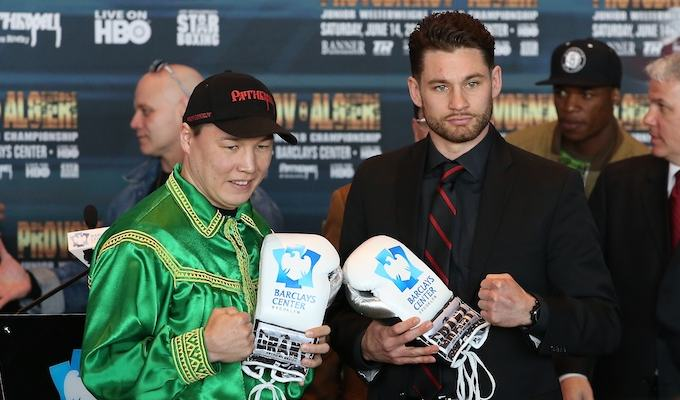 This Saturday, HBO returns to the Barclays Center in Brooklyn, NY to televise a couple of World Championship bouts as, “The Siberian Rocky”, Ruslan Provodnikov steps into the ring, to defend his WBO Junior Welterweight title, against the undefeated, NY born, Chris Algieri. The other Championship fight on the card will be Demetrius “Boo Boo” Andrade putting his WBO Junior Middleweight belt on the line against Brian “The Lion” Rose.

Ruslan Provodnikov (23-2 with 16 KOs) came out of nowhere 15 months ago when he gave Timothy Bradley everything he could handle for 12 rounds of 1 of the fights of the year last year. His aggressive style against Bradley, and then against Mike Alvarado at the end of last year has made him not only a fan favorite, but a very dangerous man in the ring. Even though he is now currently ranked as the 3rd best junior welterweight in the world, his entire resume of work has still not convinced everyone that he is who we think he is, just yet.

Provodnikov is promoted by Artie Pelullo and his last 2 fights have been co-promoted by Top Rank, but he is not signed with them, which means he has options with a win. He has already has faced Bradley and Alvarado, but still has options of a future bout with Brandon Rios, Juan Manual Marquez, and even Manny Pacquiao. His manager has stated that he would love to fight Danny Garcia, but things may not be that easy as Pelullo has close ties with Top Rank and there may be a network problem as Provodnikov has primarily been on HBO while Garcia fights on Showtime.

Chris Algieri comes into this bout with a record of 19-0 with 8 KOs. The 30 year old had his best win 4 months ago against Emmanuel Taylor in a 10 round unanimous decision. He doesn’t have too much power, but he’s a good technical boxer and he knows how to use his 72 inch reach. Just as a comparison, Provodnikov has a 66 inch reach, so if Algieri uses his jab well, he should be able to neutralize the pressure offense of Provodnikov. His biggest problem is that when Provodnikov connects, it will look very different then when he connects.

Algieri isn’t very well known and may not have beaten or even face anyone of significant value, but he does have good skills. Provodnikov is kind of the opposite, as he has faced bigger names, and has done well against him, but isn’t exactly known as a technician. Provodnikov has a lot to gain with a win as he continues to move up the rankings, not only on paper, but in people’s minds. Algieri has a chance to put his name on the map and fly up the rankings list, in which is he barely in the top 50 for junior welterweights as of now.

For Algieri to win, he has to use his jab to keep Provodnikov at bay, control the pace of the fight, and hope to win on the cards by a decision. For Provodnikov to win, he just has to get inside Algieri’s jab, continue with his full court press type of style and attack, attack, attack. I think Provodnikov will try to force his way in and take the jabs on the way in because he knows that Algieri can’t hurt him. Because of this, I’m going with Provodnikov by stoppage. Then we can see what the man we call “The Siberian Rocky” will have in store for us next, people will definitely be watching, enjoy the fights.