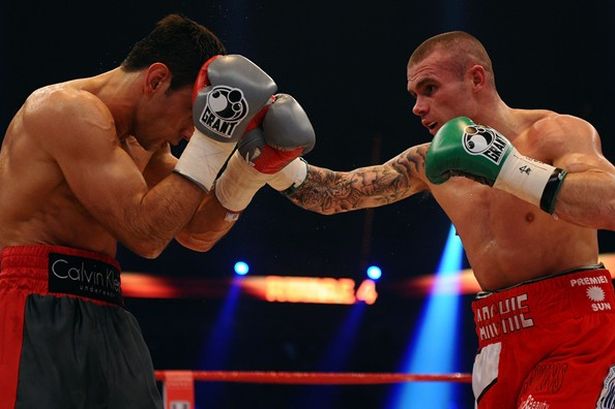 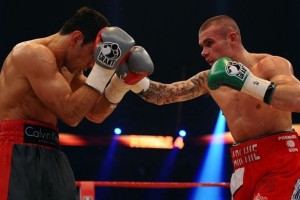 Martin Murray (30-2-1, 13 KO’s) moved up to the super-middleweight division on June 26th in his Matchroom Sports debut in Liverpool, England. He cleaned out the hastily acquired George Beroshvili in two rounds and looked sharp doing it, but now he wants the big names in his new home at 168 lbs.

The Beroshvili win came on the back of a punishing eleventh-round TKO loss against WBA Super World middleweight champion Gennady Golovkin in February. It was Murray’s third unsuccessful title bid after debatable defeats to Felix Sturm and Sergio Martinez, and seemed to be the final factor in his decision to move on to greener pastures.

In a recent interview, he told Boxing News Online, he has a roll call of opponents he would like to face when the opportunity for world honour presents itself. But in the coming months, he is looking to build momentum by squeezing in a few more appearances before making a charge at a title sometime next year.

“My next opponent on July 18 will be an improvement on the last, I’m not sure who it will be yet but we’ll keep moving forward.”

“I’m really hoping to fight on the September 12 bill [headlined by Kell Brook’s next title defence], that will be a big fight for me if I do.”

“It won’t be a world title fight because I don’t think that makes much business sense at the moment. It would be better to build me up and get me a world title shot next year, then I can look at unifying.”

If it sounds like Murray is getting ahead of himself after just one appearance in a new weight class, it seems less so after you see the plan he laid out.

“If I could choose a world champion to challenge, it would be the winner of Arthur Abraham – Robert Stieglitz I’ve not seen much of Stieglitz but I know about Abraham”.

“Then, hopefully George Groves beats Badou Jack and I could unify against Groves and then go on to fight James DeGale. That’s the beauty of being with such a good promoter in such a good division.”

Under Eddie Hearn’s guidance this route is a plausible one. Hearn has a good working relationship with the German-based Sauerland Promotions who house Abraham and as of last year Groves too. James DeGale is a Matchroom fighter, and so there are few political roadblocks prohibiting Murray’s path.

A few extraneous pieces have to fall into place for his ideal scenarios to be realised, and running through that suggested line-up without taking a loss will be a huge ask.

He will get his chance if he keeps on winning and then big domestic world title fights with DeGale and Groves await if there is still a title belt in circulation.

Murray has competed at the highest level against the most daunting opposition, and will take all of that priceless experience in to the ring against younger, less seasoned professionals if those bouts get made. He has the chance to make a real impact from here on out.