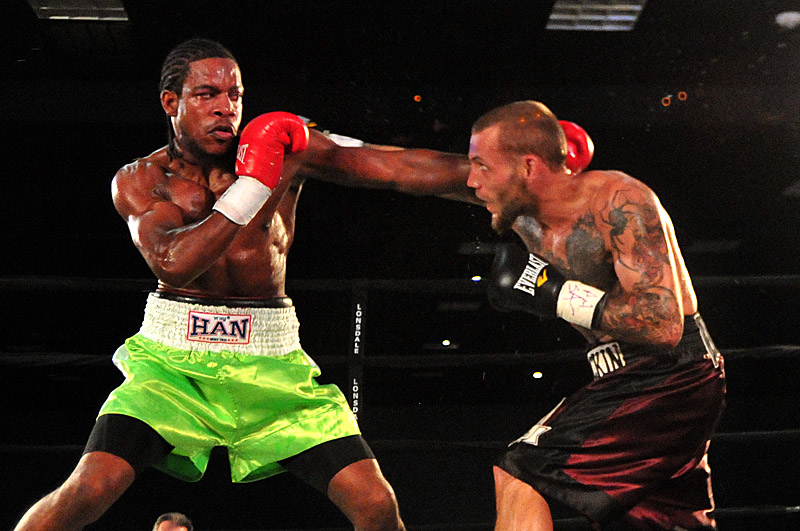 This past Saturday night, In front of a near capacity crowd at the Valley Forge Casino Resort, Naim Nelson and Ryan Belasco battled to an 8-round majority draw for the UBF All America’s Jr. Welterweight title while Frank De Alba scored an 8-round unanimous decision over Jesse Carradine which highlighted a 5-bout card.
The show was promoted King’s Promotions and Peltz Boxing.

Nelson and Belasco battled to a close nip and tuck battle.  The fighter’s styles were opposite of conventional wisdom heading into the fight as it was Belasco who was ahead when the fight was a boxing match while Nelson was getting the slightly better of the action in close.  It seemed going down the stretch it was Belasco who was in front and one judge did agree by awarding Belasco the fight 77-75.  He was overruled 76-76 on the remaining two cards thus rendering the split draw.

In the co-feature, De Alba won his 12th consecutive fight as he he scored a knockdown in a nicely contested 8-round battle.

De Alba controlled the action moving in an out.  The taller Carradine tried to box from the outside and would occasionally get in a solid shot.  De Alba worked the body well but it was a short right hook that sent Carradine to the deck in round five.  Both guys fought hard throughout and even though he was the winner, De Alba had some swelling in his face.

De Alba of Reading, PA won by scores of 79-72, 78-73 and 76-75 and is now 14-1-2.  This was his 12th consecutive win and is unbeaten in 16 straight.  Carradine of Las Vegas is now 8-4-2.
Anthony Prescott scored three knockdowns and finally put Shawn Sutton away at of 2:19 of round three of their scheduled 4-round Welterweight bout.
Prescott dropped Sutton with right hands in each of the three frames and there was doubt that Sutton would be allowed to continue after round two.  Prescott only had to work another 2:19 and he dropped and hurt Sutton and the fight was over.
Prescott of Cherry Hill, NJ is now 4-3-2 with 2 knockouts.  Sutton of Norristown, PA is now 0-3.
Travis Thompson scored a 4-round majority decision over Benjamin Burgos in a battle of hard luck Lightweights.
Thompson of Pottstown, PA won by 39-37 twice and 38-38 and is now 6-11-3.  Burgos, of Mount Pocono, PA is now 1-9-1.
Christian Molina remained undefeated by scoring a 50 second stoppage over Josue Rivera in a Jr. Welterweight bout.
Molina dropped Rivera for the ten count from a combination in the corner.
Molina of Allentown, PA is now 3-0 with 2 knockouts.  Rivera of Philadelphia is 2-6.
Photos by Jeff Julian / King’s Promotions
Tweet