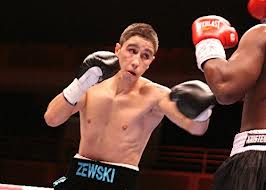 Tha Boxing Voice met  up with Canadian Mikael Zewski following his recent 2nd round KO victory over Roberto Ventura to take his undefeated record to 25-0, with 20 knockouts. The welterweight prospect was pleased with his win against wh0 he described as a “tough guy with a good punch.”

He was then asked when he will get his breakthrough fight, so that he is known by more than just hardcore fans of boxing to which he replied, “Next fight I hope man, I’ve been begging for it but it’s a matter of opportunity.” He expressed that he was grateful to Top Rank for keeping him busy (5 fights in the past 12 months) but it was clear he was hungry to step up his level of competition. Zewski says that he is willing to fight anybody who would help him break into the division’s top 10.