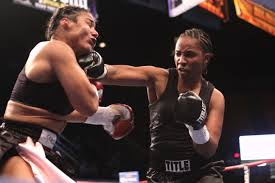 Nelson, who hails from nearby Ashburn, VA and is regarded as a top pound for pound fighter, came into the bout with a lot of confidence due to excellent performances of late. Blencowe however didn’t come all the way from Australia to not put up a serious fight.

In the opening round, Blencowe silenced the pro-Nelson by coming out strong and hurting Nelson early on. The 37-year-old Nelson remained calm and recovered to outbox the rugged Blencowe.

“She really came to fight and I knew she was going to be tough because of the opposition she’s fought and her background in MMA” said Nelson, who improved to 11-0-3 with 1 win by knockout. “It was a good fight and I’m the first to admit this wasn’t my best performance but I definitely outboxed her and did enough to keep my title.”

Nelson also dismissed the notion that she may have received a hometown decision.

“I was making her miss later on and countering her well in the second half of the fight. Both my corner and I were confident that after the first few rounds, I was in control and took over down the stretch. Keeping my title is harder than winning it was and I always have to stay two steps ahead of the competition. I’m going back to the gym tomorrow to prepare for my next fight!”

Nelson returns Saturday, November 15 at the Patriot Center in Fairfax , VA to defend her title against an opponent to be named.

Douglas, one of the most talented young female fighters in the world of boxing, is now 6-0 with two wins by knockout.

Dubbed as “World Championship Boxing”, the card was promoted by Ponytail Promotions.

Founded in 2014 by respected Baltimore-based boxing businessman James Hogan, Ponytail Promotions envisions becoming one of the top promotional firms in the United States . With a keen interest in both male and female fighters, Ponytail Promotions will run a total of 10-12 shows per year in Maryland , Virginia , Washington DC and North Carolina .