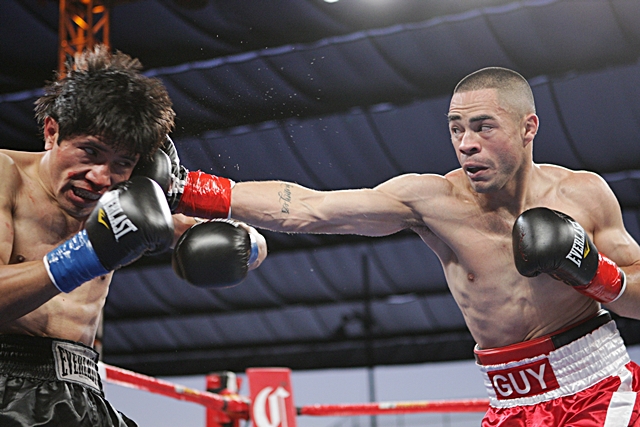 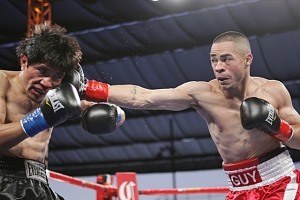 Guy Robb (14-1 6KOs) stood in front of Steve’s Pizza in Elk Grove, CA on a Friday afternoon as he stood and answered questions from the media and showed support to a local card promoted by Marcus Caballaro. In the middle of a heatwave near California’s state capitol, where the seasons are more words than manifestations you see in day to day life, Robb explained what is next for himself. “I am looking at November, I don’t know the details or [anything] , but that’s what we are aiming for right now.”

Robb who since signing with manager Herb Stone, or as some might say “The Bay Area’s Al Haymon,” has been very active and fighting top level opposition. Last August Robb defeated 10-0 prospect Ronell Green by way of a third round knockout on the Fox Sports 1 televised portion of the card. Prior to this win Robb fought undefeated Daniel Ramirez earning a decisive victory in April. “[That’s] the fourth undefeated fighter I faced, I have gone to people’s hometowns and this and that. I think it is necessary to take some challenges, that’s just learning, we are just learning.”

It appears that Robb could be on his way to headlining a televised card in the near future and Robb is definitely a fan of this concept. “Man, I am with that! That is what we are trying to do, we are moving on up, but if not I am fine with that too.” Robb who is a nationally known boxer to the hardcore fans, also has a subtle sublime quality that helps in the fight game, a name that just sounds famous. Robb just sounds like someone you tune in to watch and see a big fight and since this writer started going to his fights. Robb fights even in the amateurs always felt extra special.

Most fans remember a fantastic clash between Joel Diaz Jr. who trains with Abel Sanchez at The Summit and Guy Robb that should of been fight of the year in 2012, but had the misfortune of falling in January so most voters forget it by the time the votes are tallied. In fight that featured three knockdowns, that had Robb flooring Diaz Jr. early and Diaz Jr. returning the favor only for Robb to come on strong and get caught late. When asked if he believes “Imagine that, a unification bout and I believe that too, that [we’ll] both be champions,” Robb stated with excitement.

As for what’s next Robb he feels he is in no place to call anyone at the present time. Robb’s main focus right now though is to fight at featherweight as he is not worried about particular opponents. It is more so just staying busy and working his way up to the top. It’s a blue collar attitude that is endearing coming from a fighter from Sacramento, CA, a blue collar town and even more so a fight town, where you earn the respect of the educated fight fans.

For years, the UFC and more so popular bantamweight Urijah Faber has had a strong hold on Sacramento as a superstar, but with Robb’s style and work ethic, it seems it just takes one good run to give Sacramento’s proper shine as an all inclusive fight town. In this day and age it is rare to hear a nickname like “the fighting pride of allotted city,”  but Robb truly is that. Robb is a superstar, but it is not just for his fights and his impressive resume. It is who is as a person and how he is a living embodiment of a forgotten gem of a city in North America that is Sacramento, CA.