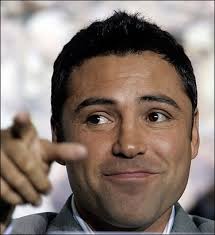 Boxing’s biggest fight may come to an end sometime this year between promotional organizations. Golden Boy Promotions owner and hall of famer Oscar De La Hoya has stated that his goal for 2014 is to end the cold war that has been going on between himself, his company and Showtime along with Bob Arum, Top Rank Promotions and HBO.

” My boxing goal for the year is to end the ‘cold war,'” stated De La Hoya via Twitter.

There has been bad blood between the two promotional stables for quite some time but when they have managed to work together they have been able to put on great events. They may be able to work together again but it would probably be more likely to see the networks budge on working with the other side first.