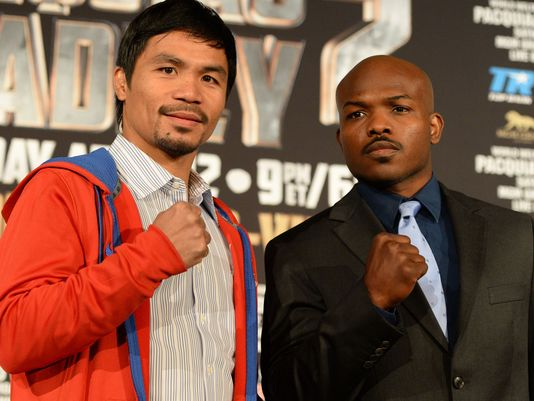 Coming off a one-sided victory on Pay-Per View over Brandon Rios, Manny “Pacman” Pacquiao (55-5 38KOs) once again not only has another title shot coming his way but a chance to seek vengeance against the man who was the first to arguably “rob” Pacquiao of a win. In June of 2012, in front of a sold out MGM Grand arena, Pacquiao took on the number one contender for his then WBO Welterweight title, Timothy Bradley (31-0 12KOs). In a competitive fight, it appeared that once the final bell rang concluding the twelve-round, Bradley was going to get his first loss. Then came the announcement of the judge score cards. Judge Jerry Roth scored the bout 115-113 in favor of Pacquiao but Judges Duane Ford and C.J. Ross scored it 113-115 in favor of Bradley, awarding “The Desert Storm” the split decision victory.

Depending who you talk to some could argue that the fight was close and many have since said that they firmly believe that Bradley did win the fight. To most though, regardless of the in-ring injuries that Bradley suffered during the fight, Pacquiao losing was quite a shock.  Six months after the Bradley debacle, Pacquiao was viciously knocked out when he walked in the Marquez’ right hand at the tail end of the sixth round. Pacquiao then went on to beat Brandon Rios a year later in Macao, China.

On April 12, 2014 once again from the MGM Grand Garden Arena, Pacquiao will have his chance to rewrite his history when he takes on current WBO Champion Timothy Bradley in a much anticipated rematch. In the first fight Pacquiao admits that he didn’t take Bradley that serious but now after winning fight of the year honors against Provodnikov and decisively beating Juan Manuel Marquez; the decision from the previous fight is weighing heavily on him and he has no choice this time but to take this fight serious.

“To be honest, I wasn’t as motivated when I was training for our first fight. I guess I didn’t take him seriously enough,” stated Pacquiao, “I am impressed with what Bradley has done since our fight.  He is a different fighter now since we fought.  He has more experience at this level and as a welterweight champion.  He fought extremely well against Márquez.  I knew Tim would beat him utilizing his speed.  But I am still faster than Bradley.”

In his previous outing against Rios, we saw a cautious version of Pacquiao, which is understandable as he was knocked out cold in his previous fight. The difference though is that because of the past, he has to change his game plan and leave it all in the ring.

“The only way Bradley can beat me this time is to knock me out.  He cannot outbox me.  I will be the aggressor.  I will throw a lot of punches at him – more than I threw against Rios — and I will land them. Last time I was too nice. This time, I will finish what I start.”