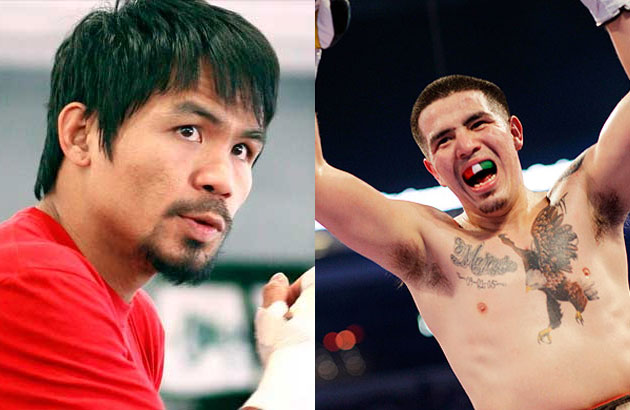 MACAU (July 26, 2013) — Fighter of the Decade, Congressman MANNY “Pacman” PACQUIAO (54-5-2, 38 KOs), the lone congressional representative from the Sarangani Province of the Philippines, and former world champion BRANDON “Bam Bam” RIOS (31-1-1, 22 KOs), of Oxnard, Calif., will kick off their unprecedented 23,722- mile, seven-stop international media tour Tomorrow!  Saturday, July 27, with a news conference in the Venetian Ballroom at The Venetian Macao®, beginning at Noon local time.  The press conference will be streamed live to the U.S. via www.toprank.tv, beginning at Midnight ET / 9 p.m. PT.  Joining Pacquiao and Rios at the press conference will be their respective trainers, Freddie Roach and Robert Garcia, along with Hall of Fame promoter Bob Arum, Ken Hershman, President of HBO Sports, and Edward Tracy, President and CEO of Sands China Ltd.

The media tour, which is promoting Pacquiao’s 2013 debut, in a 12-round welterweight rumble, against Rios, one of boxing’s most exciting fighters, will then head to Beijing, Shanghai and Singapore before meeting U.S.-based media with a day spent at the Bristol, Conn.-based headquarters of ESPN, followed by press conferences in New York and Los Angeles.  Promoted by Top Rank® and Sands China Ltd., in association with MP Promotions and Tecate, Pacquiao vs. Rios will take place Saturday, November 23, at The Venetian Macao’s CotaiArena™.  It will be produced and distributed live by HBO Pay-Per-View®, beginning at 9:00 p.m. ET / 6:00 p.m. PT.

For Pacquiao, boxing’s only eight-division world champion, this marks the pound-for-pound box office monarch’s first fight outside the U.S. since his 12-round super featherweight unanimous decision victory over former world champion Oscar Larios in 2006, which took place in the Philippines.  Rios’ only fight outside the U.S. was in México in 2008 when he won a 10-round split decision over Ricardo Dominguez.