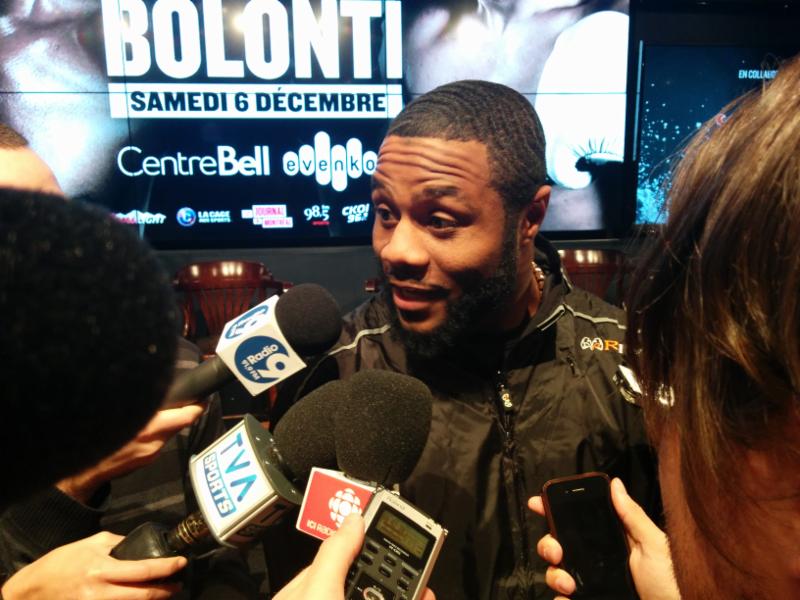 (about his decision to not trash-talk Thursday)

“Everything in its time. Everything I do is calculated. People think I’m unpredictable, but my strategies all well-planned with my sports psychologist. Now, for this fight, there isn’t any battle of wills, so there’s no point in trying to intimidate my opponent. We have another plan on the psychological front, but intimidation is not part of it.”

“He’s a boxer with stamina. He has 35 wins, 24 by knock out. He’s never lost by KO, which means he’s coming here to go the distance. He’s had three months to prepare because he was initially set to fight Lucian Bute. He says the fight will be easier from a strategic standpoint because I’m a right-hander, so I know he’ll be ready. He’s here to try and surprise everyone. A win would allow him to be noticed at the international level.”

(On Bolonti lasting 12 rounds vs Braehmer on three weeks notice)

“Going the distance against a world champ, that says he’s a quality boxer. He has experience, he has stamina, so we’re in for a good fight at the Bell Centre on Saturday night.”

(Pascal says not thinking about Kovalev fight just yet)

“All I’m thinking about is this fight. I know Bolonti is the ideal opponent for me to prepare for the next bout, whoever it will be, against any right-hander, and allow me to go to the next level.”

“I was preparing to fight Lucian Bute and, suddenly, he got injured.  I know many people from Montreal follow him and that when he fights, the arena is full, so, I was quite disappointed. But it’s always easier to fight a right-handed boxer (like Pascal) than it is a left-hander (like Bute). The strategy will change, but it’s nothing to worry about. I’m looking forward to the fight.”