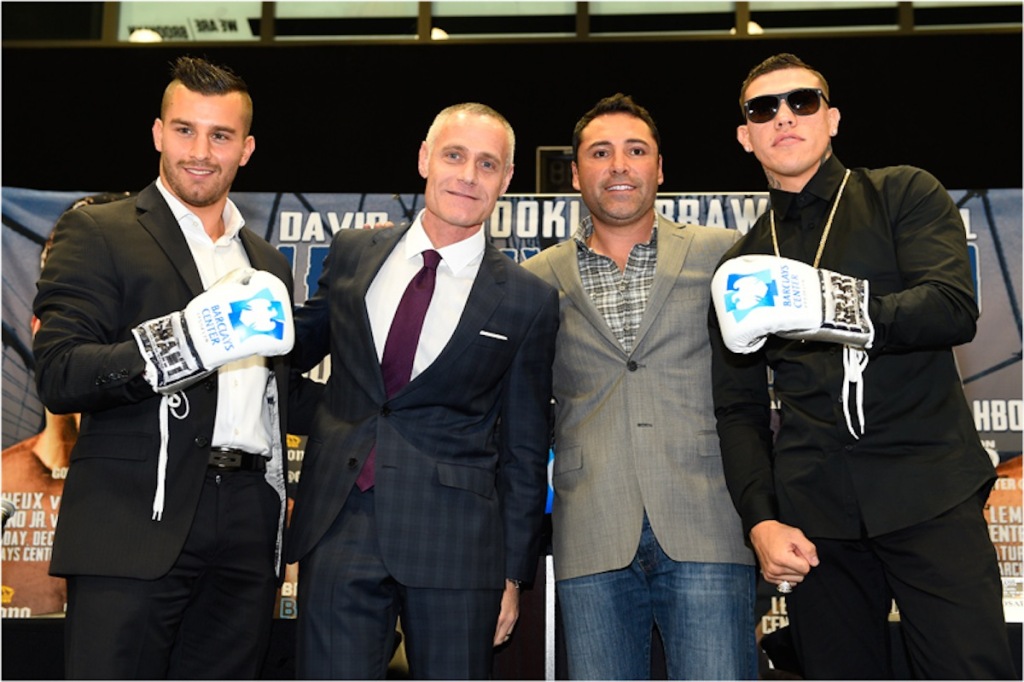 “It’s good to be back in Brooklyn. I’m very excited. This is a great opportunity for both of us fighters.

“I expect the best Gabriel Rosado when I get in the ring with him. I’m not worried because it’s going to be the best of Lemieux.

“This is a big opportunity to be headlining on HBO. I’m not going to miss my shot. I’m going to leave everything in the ring and I will not leave disappointed.

“We’ve been working on a lot of things the last few years and now we’re getting to where we want to be. This is the best camp I’ve had in my career.

“I’m here from Montreal and I’m here to represent and give you guys the best show and a great night of boxing before the holidays.”

“There’s something different about coming from Philly. Any man who steps into the ring is brave, but something about Philly fighters, we’re willing to die in the ring.

“I had a great training camp, I have a tremendous team. We worked on a lot of different things. We’re coming off the Bryan Vera knockout so I really feel like I have the momentum.

“Lemieux is a strong guy who is hungry, but I know this is my opportunity and this is my time.

“Having been in every situation, I know what I need to do. I can’t blame the politics, I just looked into myself and made myself more focused and more disciplined. I’m extremely happy about this opportunity to put on a great show.

“I always thank the fans because I’m only relevant because of fans. The fans have always showed love and always showed up. On Saturday I’m going to give the fans my all so they know I appreciate them.

“By the end of Saturday, I wont be that tough journeyman, I’ll be a star.”

“I had a great training camp. It was eight tough weeks. I started training with Gennady Golovkin to prepare him for his fight. I’ve trained extremely hard and have no excuses. Come Saturday night, I’ll be ready.

“I talk with my fists so James can say what he wants. It’s easy to talk before you get hit in the face.”

“I hope on December 6 Hugo is ready to fight and doesn’t get any little abrasions. I don’t want him to have to tell the doctor he can’t see.

“I hope he’s ready to fight Saturday night because it’s on.”

“I’m very happy to be here. I feel like I’m at home here in Brooklyn with all the support that I get here.

“This was a tough camp, It was a good camp. I’m ready to go and I’m ready for Hank.

“I’m not a big talker, so I’ll let Hank talk all he wants. On Dec. 6 at Barclays Center I’ll do my talking in the ring.

“It’s been a hell of a camp, I have two of the best trainers in the world with me. Everything you read and everything you see about me is the real deal.

“When you have a guy like me coming from Philadelphia, I try to imitate these great guys like Bernard Hopkins and Gabriel Rosado.

“These two belts, you best believe they’re coming back to Philadelphia.”

“I made my 97-year-old grandfather cry when he saw me on NY1 yesterday.

“I want to thank Barclays Center for helping those kids in Brooklyn because I used to be one of them.

“It’s a beautiful thing to bring boxing back to Brooklyn and I hope we keep it going.”

“We are one thousand percent sure that Saturday’s fight is going to be amazing for the fans. What you will remember is that you watched David Lemieux make his U.S. debut.

“We had a very tough training camp and David is ready to show you what he can do.”

“This is a real pleasure, I looked at Gabe when he fought Gennady Golovkin and I was amazed by what I saw, which was a Johnny Tapia. I saw a young man who was learning the hard way.

“He was taking on fights and showing people the heart he has, but he also had a great boxing ability that god gave him. I don’t think he realized the talent he has.

“Rosado has a great team, I’ve worked with a lot of different trainers, but we really have a tremendous team put together.

“He’s going to show people another Bernard Hopkins or Johnny Tapia so look out.”

“The tickets for this fight are extremely affordable for the caliber of fighters and of fights. This is an early holiday present from Golden Boy Promotions.

“The fighters you see right now might not be the pay-per-view fighters of today, but these are the fighters who are fighting for that position and it starts this Saturday.”

“We’re very happy to be working with Barclays Center, they are committed to championship boxing and this card is no different.

“Gabriel Rosado is taking on the very dangerous David Lemieux. You don’t want to blink because Lemieux has power in both hands. Gabe Rosado has taken on the best in the business.

“When we put together these big cards we always put together those big competitive undercard fights. We have great prospects from all over the country fighting on the undercards. These guys are the champions of tomorrow.

“James De La Rosa is coming off of a big win against Alfredo Angulo and now he’s going to take on one of the top prospects in Hugo Centeno Jr., who is here to test his skills at this level.

“Hank Lundy and Thomas Dulorme is a fight with two guys who are top fighters in their division so you don’t want to miss that one.”

CAMILLE ESTEPHAN, President of Eye of the Tiger Management

“It’s a great honor and privilege to be here. I think boxing wins with this card, this is where boxing is at it’s best, when we have competitive cards like this.

“I really don’t think it’s a 50-50 fight, I don’t think people know. Rosado is a great way to find out if David Lemieux is for real.

“Saturday night David will take the opportunity to become a superstar. We’ve done everything we have to do every single day and I’m so proud of David. There are no shortcuts.

“We have so many great coaches, including Marc Ramsay who is a great person and great coach who is helping boxing in Canada.

“We know what David is all about, but you will all find out on Saturday night.  Don’t miss this one and don’t blink.”

“Dulorme is a great fighter and I believe he is going to be the next 140-pound champion of the world. He will do his talking in the ring. The single most important thing is that he’s not a trash talker, he’s just a fighter.”

“Fights like these are what boxing is all about, it’s the number one sport in the world and we have to keep making new stars.

“Every fight on this card is going to be amazing.

“Hank Lundy has added two major league trainers to his camp, in Barry Hunter and Mike Stafford. I want to thank them for helping the sport of boxing.

“Hank Lundy has been waiting his turn, we’ve traveled everywhere with Hank Lundy, because we’ve had to. The bigger the fight is, this is where the Philadelphia boxer comes out of him. He’s what TV wants, because he’s going to give his heart.”

“We are really excited about hosting another big night of boxing at Barclays Center. Golden Boy continues to invest in bringing great boxing to Brooklyn.

“Zachary Ochoa, we’ve heard a lot about him, he’s a big personality who’s been training on the Williamsburg Bridge so many of us have seen him going back and forth.

“In just over 24 months, Barclays Center has become the heart of boxing on the east coast. Many great fighters became great champions here at Barclays Center and we are very proud of that.

“We think that next year will be the biggest yet for us. We want to be in the big event business and we want to bring the biggest events to this venue. We will bring the best of boxing to the borough of Brooklyn.”

“New York is key in so many ways and with it’s rich boxing tradition we are once again privileged to host fighters from all around the world.

“Saturday’s card is here with the spectacle of a big fight card, but my first thought about this card is that these are all hard, competitive and evenly matched fights that fight fans want to see.