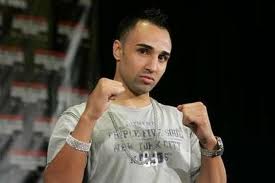 With just over a week to go until Manny Pacquiao vs Chris Algieri is scheduled to take place in Macau, China for the WBO welterweight title, Nestor Gibbs managed to grab some time with former two-weight world champion Paulie Malignaggi to get his thoughts on the fight.

Paulie gives Algieri credit for the development he has shown as he climbed the rankings, but thinks it is folly to base any predictions for this fight on his most recent performance where he captured the WBO light-welterweight title (which he still holds) from Pacquiao’s gym-mate, Ruslan Provodnikov.

“Chris has shown his preparedness is impeccable each time he goes out there and he’s made tremendous strides and improvements over the last few years. I think the similarities between Pacquiao and Provodnikov are almost none, this is a different style match-up.”

Paulie went on to describe how he sees Pacquiao and Algieri’s styles meshing when they meet, explaining how this will not quite be a fight of the chalk and cheese variety.

When it came time to pick a winner Paulie seemed pained, as a fellow New Yorker is in the mix, but in his typical forthright manner he refused to sit on the fence. This also may have been made easier by the fact that he won’t need to be impartial when calling this fight for the Showtime broadcasting team, as it will take place across the street on HBO.

“I think Chris has shown us he knows how to come prepared and he knows what game-plan to put together for these kind of tough fights. You gotta favor Pacquiao this time. Last time I told people don’t be surprised if Chris beats Provodnikov, stylistically that was a solid fight for Chris to handle. This time it’s a little bit more difficult.”

When the dust settles for Algieri though, Paulie sees this opportunity to fight Pacquiao as a win-win situation regardless of the result.

“At worst if he puts in a good performance, even with a defeat, he’s still the 140 pound champion for the WBO and that goes for a lot, there’s no shame losing to Manny Pacquiao.”

To clarify, the WBO light-welterweight title that Algieri won from Ruslan Provodnikov in June of this year will not be on the line as Algieri is the one who is moving up a weight class to contest for Pacquiao’s title. And of course, a Paulie Malignaggi interview would not be complete without a few laughs, and he provided them with this little dig at Manny Pacquiao.

“As far as Pacquiao’s power, it hasn’t really been the same the last few years. We can chalk that up to whatever you want to chalk it up to but it has not been as explosive or the same.”