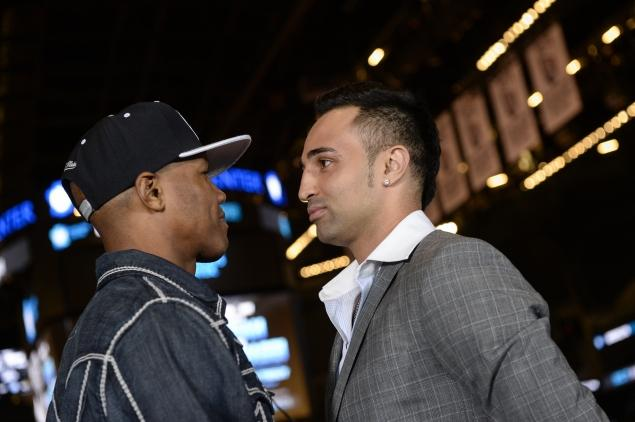 On December 7th, the fight for Brooklyn supremacy will be fought between Paulie Malignaggi and Zab Judah. Both fighters call Brooklyn home and were caught off guard with this opportunity to fight each other Malignaggi stated, “I’ve been around Zab a long time and never expected to be across the ring from him, but, you know, we have to give Brooklyn what Brooklyn wants. So, it starts there.” It’s not just that Malignaggi and Judah are from Brooklyn, Malignaggi stated that they have worked with each other years before either were on the Championship level. “Zab and I go back a long way. I can remember when Zab worked my corner for a fight [1999 Empire State Games at Hofstra University]. Zab was an honorary coach and working the corner for all the amateurs. He actually trained us that week.”

In his last fight, Malignaggi tried to defend his title against Adrien Broner but walked away with a split decision loss. It was a close fight, and depending on how you score fights, an argument could be made that Malignaggi’s activity should have been enough to win. Now four months since the Broner fight, Malignaggi says that he and many others feel he did enough to win the fight. “It’s been a long road. It’s had its ups and downs. Speaking of the last fight, some things irk me. That result definitely irked me. I don’t mind losing a decision; it’s close and can go both ways. Things happen. There hasn’t been a day since June 22 that I don’t get at least one or two people, no matter what city I’m in, come up to me and say, ‘Paul, you got screwed in that Broner fight.”

Malignaggi and Judah combined have 13 losses between the two of them, leaving fans and media feeling that this fight is a cross-roads fight for them. With the pride of Brooklyn on the line Malignaggi is expecting a war; he stated, “Whenever you have a fight at a high level, you are always representing your city, the city you come from. It’s usually Brooklyn against another city. But being its Brooklyn against Brooklyn, it becomes a borough divided and you end up breaking it into neighborhoods and who is going to support what neighborhood. So it’s pretty cool.”

Some fighters can leave their feelings outside the ring, and some refuse to fight friends. Often it’s the competitive nature in fighters that supersedes their friendship, Malignaggi and Judah is no different. “I’ve fought friends in the amateurs, but never in the pros. Once the bell rings, we both have a goal. We’re both competitors and we both want to win. Once somebody lands that first punch, then the other guy hits you a little harder, before you know it you’re mad and in the mood for a fight,” stated Malignaggi.

For years, both Judah and Malignaggi have competed against elite fighters and have managed to tread the waters at the championship level. Both want to prove that they have a lot left in the tank and Malignaggi understands the risks involved fighting Judah, he stated, “Zab’s a crafty guy, a veteran, very versatile and still has those fast hands and southpaw stance. He’s been around for a long time because of his ability and craftiness and his ring intelligence. So there’s some stuff to deal with. But that’s why you go to training camp, devise a game plan and then you put it all on the line, you put it all together.”

To Malignaggi it’s not just the win he is looking for, he also looking to hold his head high when walking around Brooklyn, he stated, “I expect a tough fight. There’s a lot on the line. I don’t think anybody wants to lose in their home city to another guy from his home city. There’s a lot of bragging rights on the line. I expect both of us to fight hard and to leave nothing in the ring. I expect it to be entertaining for everybody.”