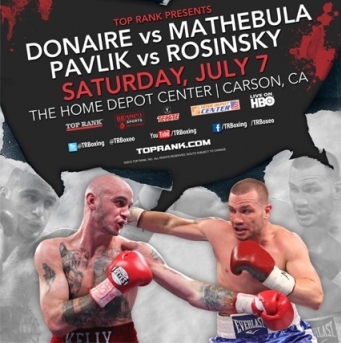 Live from the Home Depot Center in Carson, California this Saturday, Kelly Pavlik (39-2, 34KO’s) gets back in the ring for the third time this year. He will be taking on Will Rosinsky (16-1, 9KO’s) on HBO’s Boxing After Dark undercard of the Nonito Donaire-Jeffrey Mathebula, Junior Featherweight unification bout.

Both Pavlik and Rosinsky are coming off victories last month and putting their winning streaks on the line. Pavlik touting a 3 fight streak and Rosinky a 2 fight streak. This Super Middleweight bout was put together by Top Rank and HBO on short notice due to an injury to Brandon Rios, which forced Rios to cancel his fight against Mauricio Herrera.

Who’s Will Rosinsky you ask? It’s the same question I asked myself when this fight was announced last month. Rosinsky, a native New Yorker, earned this opportunity by beating Aaron Pryor Jr on June 14th, three months after a 3rd round TKO of Zane Marks. In his biggest fight to date against notable prospect Edwin Rodriguez, Rosinsky lost in a fight that was much closer than the 100-90 scores depicted. Now the 4 time New York Golden Gloves winner finds himself facing former Middleweight Champion Kelly “The Ghost” Pavlik. It doesn’t seem that long ago that Kelly was on top of the Middleweight division and taking on the biggest names in the sport. So how did he come to this point?

“And new WBC and WBO Middleweight Champion of the world, Sergio “Maravilla” Martinez.”

April 17th 2010 was when everything drastically changed for Kelly Pavlik. Not only was he dethroned of his reign as Middleweight Champion, but that’s when the personal problems piled up.

Twice in 2010 Kelly admitted himself into alcohol rehab. Once in January when he checked into the Betty Ford Center, which he only finished 20 of the 30 days the program required. Then again in November, he attended the Ranch Recovery Center in California. He spent 60 days at the Ranch; it seemed that everything clicked for him and he would be passed his alcohol problem.

After a hard fought majority decision win against Alfonso Lopez in May of 2011, Pavlik was on the right track. Then in December of that year he would be arrested for a DUI and it looked like he was going down the same road. The charges were dropped in April of this year, a month after a 2nd round TKO victory against a breeze over opponent in Aaron Jaco. Pavlik then took on Scott Sigmon and cruised his way to a 7th round TKO.

In January of this year, The Ghost strayed away from his long time trainer Jack Loew and joined the stable of Robert Garcia, who also trains Nonito Donaire, Brandon Rios and Marcos Maidana to name a few.  Since the change he is 2-0 and looked his best since his Feb. 2009 fight against Marco Antonio Rubio. Even though it hasn’t been against top level opponents, Kelly’s looked much more fluid and controlled, piecing together his combo’s instead of just trying to line up big shots. Defensively he has looked sharper as well; not just picking punches off but also showing more head movement and better counter punching. At times he gets stuck in his old ways but as he works with Garcia more, the 2011 Trainer of The Year, his philosophies will be more second nature for Kelly.

The Super Middleweight division is filled with big named fighters such as Andre Ward, Carl Froch, Mikkel Kessler, Lucian Bute and Chad Dawson (depending on if he stays at 168 after Sept. 8th fight with Ward). To set-up a date with any of these fighters in the near future, Pavlik will have to be completely dominant against a guy who only has 1 win against a formidable opponent in Pryor Jr.

While trying to make a name for himself, Rosinsky just has to simply win. Saturday night will either further pave Kelly Pavlik’s road back to the top tier of boxing, or give Will Rosinsky the biggest victory of his career, and the building block needed to move up the ranks to maybe one day get a title shot.

This fight should be another confidence booster and tune-up for Pavlik. I’m sure Rosinsky is going to give it his all, but at the end of the day, he’s not in the same class as Kelly. I see it as being a chance to continue to work on some new things such as his left hand power shots, his uppercut, and keep trying to clean up defensive flaws. Pavlik is going to work behind his jab like always, mix-up his infamous 1-2 combo with some body work, and his new found left hook. My prediction is a 6th round stoppage. And in the main event I pick Donaire by KO (haven’t decided which round yet). The fireworks begin at 10pm est. on HBO, enjoy the fights