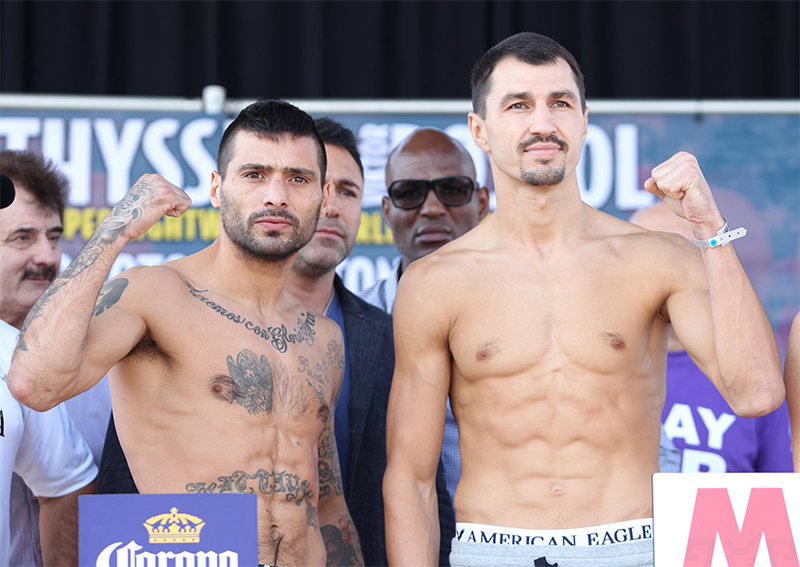 Viktor Postol (28-0, 12KOs) stunned a frantic crowd at the StubHub Center in Carson, California when he knocked out the Argentinian knockout artist Lucas Matthysse in the feature bout on HBO.

Postol was a live underdog, to say the least, but if someone was going to score a knockout in the fight we thought it’d be the man with 34 of them in 37 wins. Instead, Matthysse received his 4th professional loss.

The fight was storyboarded well from the opening bell as the action commenced in the exact manner we predicted. Matthysse was landing more power shots, Postol was throwing more jabs—and more punches overall – and neither fighter was flawed enough to be dominated.

Matthysse worked efficiently, but the only problem was that he was doing most of his work without his hands. He seemed a little reticent early on, and it couldn’t completely be contributed to the feeling out process because Matthysse was finding himself in good positions to let his hands go. He was also very capable of working his way inside without completely being smothered, and yet he got off very little.

Postol did solid work to the body and landed shots that Matthysse couldn’t help but feel.

There was a lot of dirty tactics and the fight was a bit ugly at times – well, often times very grueling and ugly. Both fighters repeatedly threw and landed punches to the back of the head and it was hard for referee Jack Reiss to get a handle on it considering the fact that both fighters were as guilty as the other. To his credit, Reiss attempted to shut the foul play down early by calling a brief halt to the action and instruct both fighters to stop the unnecessary practices. But the rabbit punching continued from both fighters.

Postol kept busy, not with a surplus of punching but by throwing punches when he wanted and moving when he wasn’t. It gave the illusion that he was doing more work than he really was. Still, Matthysse wasn’t too bothered by Postol’s game plan, even if he was letting rounds go.

Frustrations mounted for Matthysse as they headed into the halfway mark. He stopped setting up his offense as much in the traditional sense and started trusting his instincts more. He landed two very meaningful shots in the 6th round – one was a quick left counter and the other was a hard right hand, his best punch of the night.

It was the biggest round of the fight more Matthysse and he ended the 6th with solid momentum and changed the dynamic of the fight to that point. The pace was a bit faster and heavier handed, which favored Postol less and less.

Matthysse started quick in the 7th in an effort to maintain momentum and keep Postol outside of his comfort zone. Postol attempted to just fight his fight despite the obvious changes in the tone and momentum of the fight in favor of Matthysse.

Still in the 7th, Matthysse wobbled his opponent with a hard right hand. Postol was hurt, but he was able to get more time to recover after an accidental head-butt caused Matthysse to back up into the ropes. It was the most action of the fight and despite possibly being down on rounds, Matthysse was leaving a more memorable mark on the fight in a couple of rounds won compared to the portion of the fight Postol controlled.

Matthysse continued to land big shots, although Postol showed the ability to eat a punch and managed to close out the final seconds of the 7th round with a successful flurry.

Postol was able to respond with his boxing skills late in the 7th, but he was able to showcase his own brand of boxer-puncher offense and appeared to hurt Matthysse just a bit in the 8th. Matthysse wasn’t in real danger, but he felt Postol’s power in a real way, presumably for the first time in the fight.

Postol had taken back the momentum in the fight and he was making adjustments by combining the most effective aspects of his early style with a more punishing brand of offense to help match Matthysse’s own effectiveness.

In the 10 round, Matthysse was desperate to turn things around, but Postol stayed smart. He allowed Matthysse to come in and stay open, which is exactly what happened in the end.

Matthysse came flailing in as Postol moved well and positioned his feet in a strong stance as he caught Matthysse with a right hand that absolutely zapped him. Matthysse went down and remained on one knee as referee Jack Reiss counted to 10.

Postol earned the knockout in the 10th round and with it a world title. Postol has some scary physical attributes that absolutely compliment his boxing abilities and it will be hard to find his ultimate rival.

Postol was not surprised by the knockout win and said in the post-fight interview that his stoppage over Matthysse would not be his last.