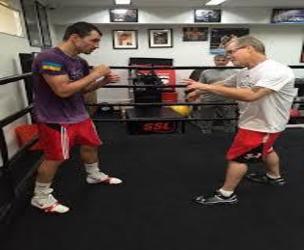 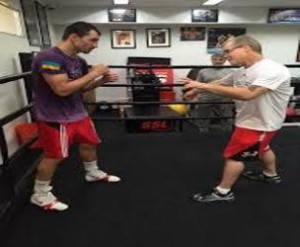 The only thing covering up the smell of sweat that might regularly drip off the walls of the Wild Card Gym in Hollywood CA., are the numerous fight cards and posters of fallen champs that drench the walls from ceiling to floor.

Viktor Postol works mitts with renowned trainer Freddie Roach between these walls; he is surrounded by protégés of Roach both past and present and can look into their eyes and see inspiration.

“This is my third fight with Freddie,” Postol said. “When I first walked into the Wild Card, I was struck by the smallness of it all; then I walked around and saw the pictures of fighters and champions. These are the fighters Freddie turned into champions. I saw the blood and sweat on the two rings. I now know the history of the greatest place in the world to train.”

Postol is 27-0 as a fighter, he has eleven knockouts and is gearing up to cross paths with one of the most dangerous all-round fighters in the junior welterweight division, Lucas “La Maquina” Matthysse.

Matthysse (37-3, 34 KO’s) is a boxer-destroyer and is coming off a fight of the year candidate with the Russian wrecking-machine, Ruslan Provodnikov. Matthysse won a 12-round decision by jabbing, uppercutting, and utilizing lateral movement, all the while setting up pot shots and traps against his plodding, come-forward opponent. He displayed a wrinkle of his game some thought he might have over-looked in the past.

In a recent interview with Fight Hub’s Marcos Villegas, Postol himself accused Matthysse of being a strict brawler who does not possess the boxing ability that Postol utilizes in the squared circle.

With his five-foot-eleven frame, Postol towers over most of his opposition in his division. His superior reach carries a stiff jab that he follows up with a menacing uppercut that ripped through former WBC interim titlist Selcuk Aydin in 2014. While Aydin is degrees below Matthysse, Postol stopped “The Turkish Warrior” in 11 rounds and delivered an eye-opening performance.

“Postol doesn’t know it yet,” Roach told the media during an open workout in his gym. “But he’s my new favorite fighter. He works very hard in the gym, does everything we ask, and he can bring it. We can win this fight.”

Roach and his team may be the sole-believers in Postol’s crusade toward the vacant WBC junior welterweight title that was recently vacated by Danny Garcia. Matthysse fought and lost a decision to Garcia (31-0, 18 KO’s) for the same belt in 2013, another fight many observers thought Matthysse might win easily.

Garcia has literally moved on to bigger things since starting his campaign at welterweight in August. He beat Matthysse to the punch throughout their 12-round contest and even hurt and dropped the Argentine bruiser in the 11th round.

Postol has been the mandatory challenger for the green belt since Garcia’s reign but received step-aside payments to stay in line and wait for another chance at the title. Now he has his shot against the man who would-be-king in Matthysse and while many pundits might pick the Argentine slugger grind out his fourth consecutive victory, Postol looks to make minor improvements that will affect his game in a big way.

“Freddie never changed (my) style of fighting,” Postol insisted. “Instead he made small, important changes in movement here and there tweaking things. He and I are together when we go into the ring Oct. 3. We are prepared to fight. We will win.”