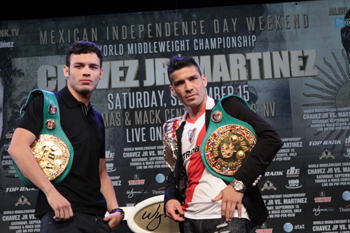 This weekend will be the biggest boxing Saturday of the year, 2 different cards, 2 different arenas, 2 WBC belts on the line, all in 1 city, Las Vegas. While the MGM Grand and Golden Boy Promotions will be putting on great card on regular Showtime, featuring Saul “Canelo” Alvarez vs. Josesito Lopez, HBO PPV will be putting on another fight that could contend for fight of the year, in the Thomas and Mack center, as Sergio “Maravilla” Martinez will square off against Julio Cesar Chavez Jr. I will make my picks for the Showtime card at the end, but this article will feature the Martinez vs. Chavez Jr. fight for Chavez’s WBC Middleweight belt.

Sergio Martinez (49-2-2 with 28 KOs) is ranked as the #1 Middleweight fighter in the world and the #3 pound for pound fighter in the world. The 37 year old Argentinean has only lost 1 fight in the last 12 years. He has stopped his last 4 bouts early and some have been highlight type KOs, featuring the KO of Paul Williams in Atlantic City 2 years ago. Sergio is known for his fearless attitude and willing to face some of the toughest contenders at 154 lbs or 160 lbs. Some of those contenders include Kermit Cintron, Paul Williams twice, Serhiy Dzinziruk, Darren Barker, Matthew Macklin, and probably the fight that started his upward trend, winning the WBC Middleweight title against Kelly Pavlik.

The 26 year old Julio Cesar Chavez Jr. (46-0-1 with 32 KOs) is the current WBC Middleweight Champion and is the son of the all time boxing legend Chavez Sr. His best 2 victories are against Sebastian Zbik and Andy Lee, but he has the talent and bloodline that can push him to new levels with a win against Martinez on Saturday night. Chavez Jr’s main criticism has been his seemingly lack of motivation or attention to detail during the lead up to this fight. He has been shown on 24/7 waking up in the evening, and going for swims while his dad is watching film and trying to tell him what to do. No matter what you think about Chavez, he is the Champion, and he is by far the bigger man of the 2 fighters.

The main statement that sums up this fight is that Sergio Martinez wants the fame that Julio Cesar Chavez Jr. gets from his name, while Chavez wants Martinez’s respect that he has from boxers and boxing fans all over the world. The winner of this fight takes a huge step forward in terms of obtaining that goal. Martinez has a 2 inch reach advantage, but Chavez will definitely have at least a 10 lb advantage at the time of the fight. I would say if this goes the distance that Chavez Jr. would have the advantage because Sergio has been known to take some rounds off, which would cost him on the scorecards, but he solves that by usually finishing his opponent before it goes to the cards. I say that this fight will not go the distance and Sergio Martinez’s experience against better competition will show in this fight. Even though both fighters have enough power to win by TKO, Martinez seems to be taking this fight more seriously and at age 37, he knows what is on the line for him, and that’s a huge motivation, because of that, I’m picking Sergio by 9th round TKO.

As I said before, just 20 minutes away from the Thomas and Mack Center, while Martinez and Chavez Jr. go at it, in the MGM, there is a great card of fights. Marcos Maidana (31-3 with 28 KOs) will be facing Jesus Soto Karass (26-7-3 with 17 KOs). I feel Maidana’s power will be on display as he will recover from his previous bout where he lost to Devon Alexander. I don’t see an upset coming in this one as Maidana wins by TKO in round 4.

WBC Featherweight Champion, Jhonny Gonzalez (52-7 with 45 KOs) will be squaring off against Daniel Ponce De Leon (43-4 with 35 KOs). This is one that will definitely not go the distance and Gonzalez will be the favorite because he’s won his last 12, and all but 1 of them were stopped early, but I have a feeling that this could be an upset, if you look at De Leon’s 4 losses, they were all to top fighters in Gamboa, Broner, Manuel Lopez, and Caballero. I’m going with the upset and say De Leon wins by 7th round TKO.

Another fight on this stacked card, and I think this maybe an undercover sleeper for fight of the night as the young IBF Bantamweight Champion, Leo Santa Cruz (20-0-1 with 11 KOs) defends his belt against solid veteran Eric Morel (46-3 with 23 KOs). If you haven’t seen Santa Cruz fight before, I strongly suggest you watch this. He’s a high energy fighter that throws over 1000 punches per fight and almost 100 punches every round, so if you like constant action, he will always give it to you. I’m going with Santa Cruz by unanimous decision over the tough minded Morel.

And lastly, the Main Event on the Showtime card will be the WBC Light Middleweight Champion, Canelo Alvarez (40-0 with 29 KOs) vs. the ultimate underdog Josesito Lopez (30-4 with 18 KOs).  Lopez threw the world for a loop when he defeated Victor Ortiz, and at that time he weighed 144 lbs, but this is at 154 lbs, and Canelo is a big 154 lb guy. I just don’t see him taking the same punches from Alvarez that he took from Ortiz, not to mention Canelo is better defensively than Ortiz. I’ve got to go with Canelo Alvarez to retain his title and wear down the much smaller Lopez, as Canelo wins by TKO in the 5th round.

When you really look at it, this should be a night that no boxing fans should miss as you have 4-5 fights that are filled with action and skill that could delight even a casual fan. My suggestion would be to watch the entire Showtime Card and then switch over to the Martinez-Chavez bout on HBO PPV when that starts. No matter which way you decide to watch or plan it, this Saturday will definitely be a night to remember, so enjoy the fights.