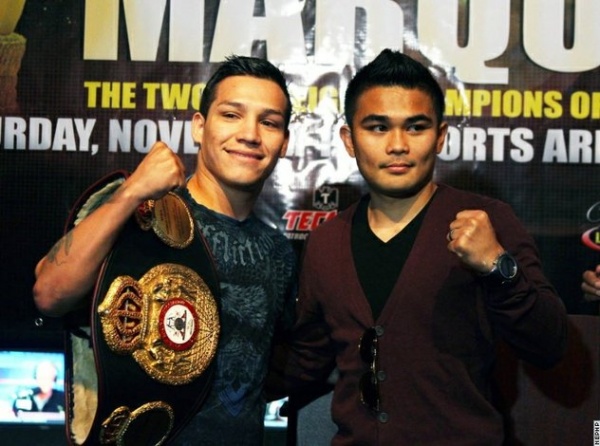 Former Olympian Viloria, was once a highly touted prospect and after capturing his first world title in 2005 seemed destined for stardom, he subsequently failed to live up to expectations. Having a series of up’s and downs, which lead to a devastating TKO upset defeat to Carlos Tamara.

At this point, Viloria was considered to be damaged goods and the general expectation was that he would swiftly go into retirement having had a solid but ultimately disappointing career. Against the odds, Viloria has turned things around in spectacular fashion, winning  5 straight fights, including the destruction of Giovanni Segura and his last avenging a previous defeat to Omar Nino Romero with a 9th round stoppage.

Hard hitting southpaw, Marquez has had a less turbulent path to the top of the division. Aged just 24, he has already had 36 pro fights and has plenty of room for improvement. This fight will be his first under the tutelage of world class trainer Robert Garcia, who also previously trained Viloria.

Marquez’s only two career defeats have come against Richie Mepranum, a defeat he avenged earlier this year and a loss to pound for pound superstar: Nonito Donaire at Super flyweight. Marquez has fluctuated between Flyweight and Super flyweight for most of his career, but has always had the more impressive outings at flyweight, which was illustrated in his last fight: an indifferent majority decision victory over Fernando Lumacad. He will however, be at his more effective weight class for the Viloria fight.

Both fighters have a lot at stake in the clash, Viloria, trying to cement his legacy further whilst further extending his renaissance, whilst Marquez will be looking for a victory open up various lucrative options.

This promises to be an action packed bout for as long as it lasts. Both fighters will be pressing for stoppages with their aggressive styles, be wary of a potential head clash and/or technical decisions. I give the slight edge to the more primed Marquez in a back and forth fight, that will see both fighters land often and in trouble at various stages throughout.