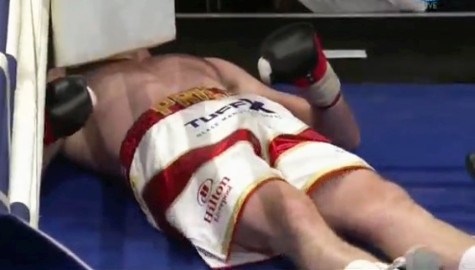 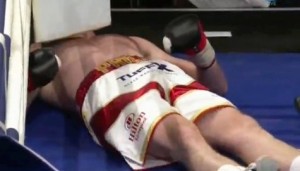 David Price has shown throughout his career that he can punch and box. However, the 32-year old former Commonwealth and British heavyweight champion doesn’t have a chin.

That was painfully put on display Saturday when undefeated German fighter Erkan Teper took on Price for the vacant European heavyweight title, knocking him out senseless in the second round.

Teper is a fighter that likes to come forward. Price is effective when he boxes from the outside and uses ring generalship. However, Price wasn’t fighting a smart fighting, and boy did Teper make him pay.

Price was on the outside, as he should have been, and Teper, using a high guard, kept stalking him. Price, for whatever reason, decided to stop moving, allowing Teper to take control on the inside, not allowing the 6’8 Price to use his arms to get away.

Teper landed a short right cross, which didn’t land with much authority, and then followed it up with a straight left hand, which also didn’t appear to land with full power, yet Price found himself found on the canvas yet again.

I think the time has come for Price to hang it up. This is the third time he’s been knocked out, twice by title contender Tony Thompson, and let’s face it – he’s just not that good.

It just goes to show, you can be 6’8 and have an 82’ inch reach, but if you have no chin, it’s a long road. Unfortunately for Price, I think the road has finally shriveled.

For Teper, it’s his 15th consecutive victory, but he’s going to have troubles moving forward if he doesn’t control his weight. He weighed-in at 252 lbs. for this fight, the highest in his career, and his body certainly looked very beefy.

We know he’s capable of doing better. He’s old for a boxer. He’s 33, not 23, so he doesn’t have much time left to spare. But, we’ve seen him in great shape in the past. He was in terrific shape against Alexander Kahl, Sandor Balogh, and Robert Hawkins, for example, weighing-in at an average of 232 lbs. for those fights.

But, in his past four fights, he’s weighed-in at an average of 250 pounds, and he’s been criticized heavily for it. If he wants to be a world champion, he has to train like a world champion. Boxing isn’t all about knockouts.

If he doesn’t fix this soon, he’s going to be paying the price. And yes, pun intended.