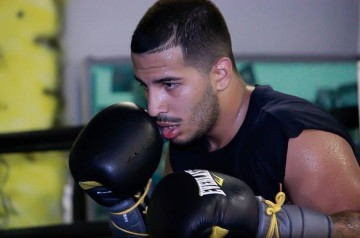 Young prospect Junior “Sugar Boy” Younan scored a quick first round knock out over Thomas Allen, in the under card of last weeks Friday Night Fights.  The 18 year old power puncher, spoke briefly to Tha Boxing Voice.  They touched on his first round knock out and on the fact that he was fighting in New Jersey for the first time.

He said the “The kid (Allen) came out & he was trying, swinging, swinging. I took a little step back, caught him with a right hand, dropped him.  He got up and I finished the job.”  About fighting in New Jersey “It don’t matter where I fight, everyone is going to love it.  Everybody loves a knock out. They are going to love what I do!”.  You might want to keep an eye on him.