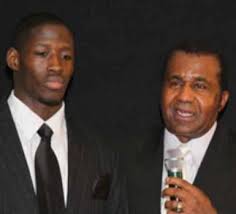 The undefeated 25 year old prospect Leandre “Blue” White, reminisces with Tha Boxing Voice over his humble origins as an amateur fighter in the legendary Kronk Gym. White, a native Detroit citizen, expressed the mystique of the gym had made him eager to start his boxing journey there.

White explained, “I knew Kronk was a famous gym. I heard of Tommy Hearns. I knew of Emanuel Steward, and I knew I was a part of history.” At the age of 14, his uncle Lanny “Blue” Edmonds, a former professional boxer, introduced him to the Kronk Gym. White expressed, “When I first arrived at Kronk, it was like home. I was treated like a brother by everyone there it felt good. There were pros, amateurs, national champions, and it felt good being surrounded by these groups of people. It helped me develop much faster.”

White expressed the atmosphere of the Kronk Gym was unlike any other. “The environment made it different, it was excitement and lively everyday,” White said. “You would see better fights in the gym than on television. It was pure entertainment, and it could have been its own T.V. show.”

White also discussed how the late Emmanuel Steward catered the amateur fighters who trained in the evening due to their obligation to go school, as much as the professional fighters who customarily trained around the afternoon. “Emanuel knew the amateurs were going to go pro, it was like an investment,” White said. “He helped us keep focus and stay mentally right. He cared about the amateurs just as much as the pros.”

White also discussed how Steward shared many anecdotes amongst his amateur fighters regarding his professional fighters. White explained, “You’ll hear either a story with Klitschko, or something. There were so many stories he used to tell us I can’t even think of.”

An amusing moment White shared with Steward was during an amateur banquet years ago. He explained, “Steward would have an amateur banquet, where he’ll give out amateur fighter of the year for Kronk and all type of stuff. That year I won fighter of the year. Steward knew me for years, but just knew me as ‘Blue,’ not my government name. When he called me up, he said ‘Blue,’ what’s your real name? And everyone cracked up.”

White described Steward as a man of integrity with a colorful personality. Sadly, when Steward passed away in 2012, the Kronk Gym was closed down, with the signage removed within 24 hours. White explained, “When the Kronk closed, some boxers continued, but others didn’t come back to the sport they were lost. It was a hard sad moment, but most people found new gyms.”

As White enters the pro game, he carries the experiences and wisdom he received from his days in the Kronk Gym. Surrounded by great talent on a daily basis, one word of advice White took to heart from the other professional fighters who trained alongside was to always stay ready, so he doesn’t have to get ready.

White’s experiences in the Kronk Gym, and polished amateur pedigree may translate into a successful professional career. White stated, “As an amateur I was a six time regional champ, won national Black Gloves, a bronze medal in the Junior Olympics, I won silver in the national Golden Gloves. I beat Errol Spence in 2012, I’ve lost to Errol Spence as well. I’ve won and lost, but have great experiences.”

White hopes to have a very busy 2015. He is currently 7-0 with two knockout victories, while campaigning in the middleweight division. He stated, “I want to end 2015 about 15-0. Time to put my foot on the gas pedal. Twenty-five and twenty-six are my prime years so I have to give it a go now. It’s time to pick it up. I have a date for early February either on the 6th or 7th.”

White plans to have a world title belt by the age of 30. He explained, “At 30 I got to have a belt. I have to be ranked in the top 10, and I have to be financially stable.” In his current situation, White balances being a fitness trainer, taking care of his daughter, and being a full time fighter. He stated, “It’s never a break, I’m always working or sleeping that’s how I like my life. I like to keep myself busy and leave no room for trouble.”

White is very optimistic for his future. He explained, “I never second guess myself, when I’m at the top of my game I cannot be touched by anyone I don’t care who it is. I’m going to stay focused, and keep working hard. Nobody can stop me besides me.”