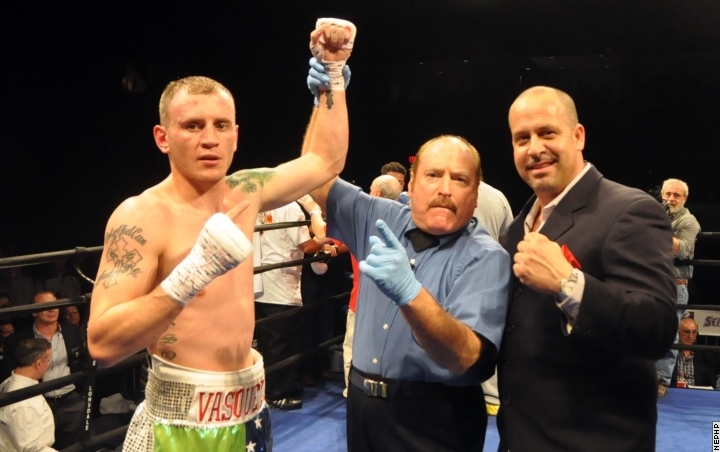 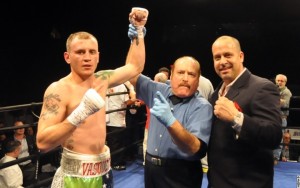 It’s hard not to like rising welterweight prospect Sammy Vasquez. He is an extremely exciting all action fighter, who gives fans their money’s worth every time he fights. This year alone he has fought five times already, winning all of his bouts by knockout, and he doesn’t seem to feel the need to slow down anytime soon. “I’m a firm believer if you stay healthy and keep the body healthy, and we all stay positive, there is no reason for me to slow down my pace. This is the first fight that went to nine rounds. Before that I was flopping guys in the third, fourth round, and first round, so there wasn’t any damage being put on my body, so there is no reason for me to not stay at this pace. I am definitely confident about my pace, and I like the way things are going,” he explained.

With a record of 16-0, with 12 knockouts, there is very little question that “The Who Can Mexican” can punch. “I have power in both hands, but I think the biggest thing is the number of punches that I throw is definitely effective. The referee stops it before I can knock them out. I would like to knock them out because I throw so many punches and they’re all hard shots, and I got them on tilt basically, the ref steps in and stops it before I can knock them out. I’m happy that I’m able to put on good shows and maintain the power that I do and the volume of punches that I throw.”

Vasquez claimed that even as an amateur with head gear and larger gloves, he has always had power and he believed that he’d carry it up to the professional ranks. “When I fought amateur I stopped a lot of guys. I was dropping guys left and right and a lot of guys ran from me, so I knew I had power, and I just thought I can’t wait to get in these eight ounce gloves and no headgear. It’s totally different in the pros. I was very excited to turn pro and see what kind of level my power was going to be on with eight ounce gloves because I was very effective.”

Although he was a very successful, highly touted amateur, Vasquez felt that his style would be more suited to the pro level. “I was in the Olympic trials, and I lost to Errol (Errol Spence) the first night and went over to the loser’s bracket and went over to the semifinals. I outpointed those guys by ten twelve points in the Olympic trials. These are all the guys that are national champions. It was always hard to get to the Olympic trials. You have to be in the top eight in the country. I was up there with the elite.” He went on to say, “I should have been an Olympian, but there’s a lot of politics in boxing just like everything else. If you’re not knocking out the champ, you’re not knocking out the Olympian. You’re not going to beat him. That’s what I did every time I fought Errol. I just tried knocking him out because I knew point system wise I wasn’t going to beat him. I knew it was going to be different with smaller gloves and everyone knows how hard I hit.”

At some point every fighter has to slow down eventually as the level of opposition rises and Vasquez understands this fully, but he still wants to remain as active as he can. “I might scale down maybe a few by next year. If I fight a good fighter, maybe one of the top ten guys and if I happen to knock him out in the first round or the first to the fifth round and I feel good, there is no reason for me not to fight the next month. If people want to see me and they enjoy what I do because I enjoy what I do, there’s no reason for me to not keep racking up wins.”

With all of the promotional rifts going on in boxing right now and the reluctance of certain promoters to work with one another, fighters often find themselves in situations where they get caught in the middle and as a result they don’t always get the fights they want or need. Vasquez feels very comfortable with his situation and his decision to sign with Iron Mike Productions because they are not involved in any disputes or disagreements with any promoter and are willing to work with anyone. “That’s one of many reasons why I went with Mike Tyson because he’s an up and comer. Everybody knows who Mike Tyson is. With his name and myself, we can only grow with each other. He has no beef with Golden Boy. He doesn’t have one with Top Rank and that opens up more avenues for me to get to the top,” he said.

It’s very easy once a fighter starts scoring a lot of knockouts and gets a lot of consecutive wins, to get a little overzealous and maybe try to take on one of the big names in their division too soon. Although Vasquez is confident in his ability, he realizes that it’s a gradual process to get to that next level. “We’re moving our way up. We’re fighting better and better guys and undefeated guys, but we have to fight someone who has a name, who’s known to be a tough fighter. Basically we have to fight someone in the top fifteen. We have to fight someone who has some credentials to them, so I can make my observation from that fight.”

When asked if  believes he can become the next big boxing star out of Pittsburgh since Paul Spadafora Vasquez replied, “I have a good name, and I carry myself well. I’m a family man and I give back to my fans. I’m a veteran with two tours in Iraq and eight years in the military. You can’t help but love me. I’m a good guy. I have a clean record. I definitely think that’s one of the main reasons I bring attraction as well as obviously my boxing. I’m an exciting fighter. Soon here I think I can sell out a ten thousand seat arena.”

Fans can follow and interact with Sammy Vasquez on: