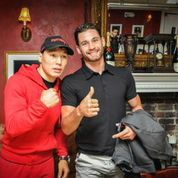 BROOKLYN (June 9, 2014) – This past Saturday, WBO Jr. Welterweight champion Ruslan Provodnikov and undefeated challenger Chris Algieri met with a small group of journalists at Uncle Jack’s Steakhouse in New York City to talk about their June 14 title bout at Barclays Center.  Their world title bout  will be televised live on HBO Boxing After Dark®, beginning at 10 PM ET/PT.
Below are quotes and images from the media conference.
Photo Credit Claudia Bocanegra
PROVODNIKOV QUOTES:

“Despite winning the title I still feel like a challenger and I train like one. The only thing that has changed for me now that I am a world champion is that I now have more responsibilities, like interviews and appearances.

“My job on June 14 is to chase Algieri and hunt him down. He should be more worried about me. His style of fighting is not my favorite. I prefer an opponent who likes to engage and fight toe-to-toe, not a runner. I don’t have trouble with runners. They have trouble with me.

“This is a very important fight to me because it will show how many fans I can attract. Brooklyn feels like a second home. I hope Barclays Center can become my home arena in the same manner Miguel Cotto has at Madison Square Garden.

“I am focusing on a shorter, more prominent career. I only want the big fights. The fights the fans want to see. I want to make an impact and leave. I do not want to outstay my welcome in boxing. Money has never been my primary goal. I want to make the most out of my abilities to be my best in the ring. The respect of the fans and my achievements mean more to me than a title belt.

“I did not have an easy time growing up in Siberia. I don’t know where my childhood friends are now. Most are probably in jail. I stole food, sniffed glue, smoked and drank. My amateur boxing coach saved my life and helped to redirect my life toward being a productive person.

“I don’t like to spend my money on frivolous things and I haven’t. My family is secure and our life has improved since I have become a champion. The governor of my region is having a sports complex dedicated in my name built. It should be completed in 2015.

“I like to recite Russian poetry to myself as I make my ring walk.

“Most of my original goals have been achieved. When I was younger I would watch Mike Tyson fight. It was my dream to meet him and I finally realized that dream at the BWAA Awards Dinner when he shook my hand and presented me with the Fight of the Year award. Now it is time to set new goals where I can help others.”

ALGIERI QUOTES:
“My training in Las Vegas was very good, we had terrific sparring and I’ve been finishing off the last two weeks of camp here in New York City.”
“I’m not in awe of fighting Ruslan at all. I’ve watched him fight in the past and I have a very strong game plan to beat him. I’ve seen what works against him and just as importantly what doesn’t.”
“Emmanuel Taylor who I beat in February was a hard punching, strong fighter who had knocked out a high number of opponents. I wasn’t supposed to beat him or Jose Peralta. The underdog role fits me perfectly.”
“I’ve always loved boxing, but I had success at kickboxing and initially pursued
that. My favorite fighter was Oscar De La Hoya, at his peak he could do it all. But boxing has always been my passion, my love.”
“I was in a couple camps with Marcos Maidana and Brandon Rios, sparring for weeks.  Both of them, like Ruslan are aggressive, very strong fighters who I had success against in training.”
“Yes, I’ve go options with my (clinical nutrition) degree, I don’t have to fight but I don’t think that
should be a factor in wanting to win any less. I’ve wanted to be a world champion
since I started boxing and I want to win just as badly as Ruslan does next Saturday.”
“Barclays is a beautiful venue and I’m sure both of us will have a large fan bases
cheering us on.”
“Of course I said yes immediately when offered the fight, fighting for a world title and on HBO is a terrific opportunity. But, also I know that I can beat Ruslan.”
“Sure many people will be shocked when I win, but not me.”
“Long Island has been terrific to me with their local support, it would mean a great deal to the people of Huntington for me to win the world title.”