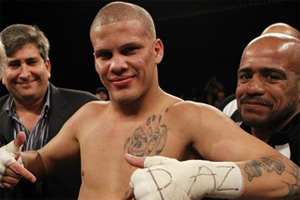 TBV: Jonathan, you started the first two rounds off very aggressively. Teddy Atlas made a comment saying Ennis gave you some good shots and caused you to do that; he earned your respect. Did those shots hurt, or did you do it as a tactical move to make the fight easier?

JG: I came out more aggressive, I figured Ennis would have been a little spent after what he did to make weight, but that wasn’t the case. I noticed he was able to retain shots pretty well so I did switch as a tactical move to be able to still win the fight.

TBV: Now the tables were turned in this fight, you haven’t made weight in the past and had to pay up to your opponents, and now Ennis had trouble making weight. What was going through your mind through the whole process? Were you upset at all or unnerved at all because Ennis failed to make weight?

JG:  It was going through my mind. I was never upset or frustrated, but before the weigh in I told my camp, I think this guy is going to come in over weight because he thinks I have come in over weight in the past, so I probably won’t make weight. I think that Derek Ennis felt it would be OK, but that wasn’t the case. I worked hard and got down to my weight. In no moment did I feel frustrated or angry. I knew it was a possibility that Ennis would come in overweight, he has fought at so many different weight classes, and I knew it was a possibility.

TBV:  You made weight comfortably, and you were still able to keep up your work rate as you have in the past. What did you do differently in this camp to make weight as easily as you did? You were still able to bring a lot of aggression to this fight; you pushed Ennis back a lot, even though you weren’t your normal big self.

JG:  What I did differently was train harder, something I haven’t done in the past. I respected my opponent and I took things more serious this time around. I’m focused.

TBV: People expected you to knock out Ennis. Were you surprised that you didn’t knock him out this fight?  Was he a tougher opponent than you anticipated?

JG: I felt like I could have taken him out in the fight, but it didn’t go that way. Derek Ennis is a strong fighter and he knew that I am a strong fighter. It was a little difficult, styles make fights and you can’t always get the knock out.

TBV: You have said in the past that you want to stay at junior middleweight, but you are such a big guy you look like you could carry 160 lbs. easily. How long do you want to stay at this weight? Do you see a move up to 160 in the next year or so, down the road?

JG: I still feel like I can make a 154 quite easily. I just have to continue to dedicate myself, something that I wasn’t doing. I still want to campaign at 154 and I feel I am going to stay here until I become champion at 154.

TBV: How soon do you want to turnaround? Your last fight before this was in September, so that’s about 3 months, do you want to keep fighting on a 3 month basis?

JG: I’m looking for the turnaround of April 6th. I did hurt my hand in this fight, so I hope everything goes well and I get that date. I’m looking for a good opponent; I don’t have any confirmation on networks at this time.

TBV: The final question to you, since you have switched trainers, are you going to relocate to Miami on a permanent basis or will you come to Miami just for training camps and then return to Puerto Rico?

JG: I won’t change the island of Puerto Rico for anywhere. That’s where I live and where I will continue to live. Until the April 6th date is official and signed, I won’t begin negotiations as to where my camp will be held. It could be held in Miami, the same way it could be held in Puerto Rico. I’m Puerto Rican 100 percent, and that is where I’m going to stay.

To listen to the Jonathan Gonzalez interview click here :