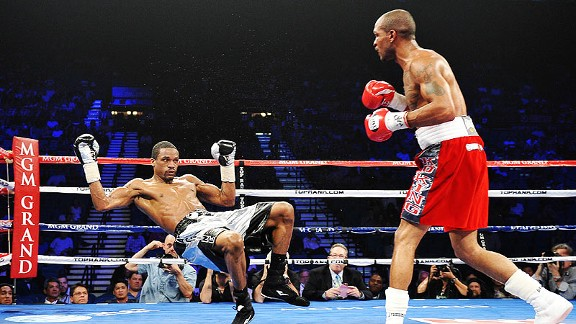 What’s good! It’s your favorite KO artist Randall Bailey aka The KO King!!!!!! I have been sitting back watchingthis boxing game get more and more political and it makes me kind of sick. Unranked and unheard of fighters getting title shots that they do not deserve. Promoters not wanting to work with one another. Fighters agreeing to fights and pulling out…no names need to be mentioned. The shit is crazy. Meanwhile a former two division world champion gets passed over for opportunities. I understand that boxing is a business but fighters are now using the “business” to become little punks. Let’s get to the point of this letter. I am not one to start any drama and today is no di-erent. However I want to put the boxing world on notice that I am still ready and willing to knock some heads off some shoulders.

Andre Berto: I stepped aside so you could fight for the IBF title. You promised we would fight and you have acted like you have amnesia. It’s cool. Crazy thing is karma has bitten you in the ass and you have had nothing but a downward spiral ever since that day too. You got busted on random drug test, had some injuries and received a few ass whoopings along the way. Be a man of your word and step into the ring with me!

Keith Thurman: I respect your come up in the game. You bringing some excitement to the ring and that’s cool. However I do think you need to step up your competition. Julio Diaz, no disrespect, didn’t belong in the ring with you and the boxing world knows it. Step into the ring with a real KO King! We both from Florida and we know some of the same gyms and people. Let’s do the damn thing!

Everyone knows Floyd Mayweather gights on September 13, 2014 and he needs to fill up that undercard. Berto and Thurman, you are both available to fight on that date and you are a damn lie if you say you arefnot. I know both of you are with Al Haymon and I am a free agent so I am not hard to nd. We ain’t got no cold war or network wars in the way of making the fight. Maybe y’all should flip a coin on who wants to step in the ring with me. Heads I’ll knock you out and Tails I’ll knock you out. Let’s be men and handle this in the ring. By the way if you try that short notice shit… I am already in shape so don’t be scared.

Al Haymon: I see you signing everybody so I know you got room for another ghter…. Make it happen!!!!!!!

One Love from your knockout nightmare,