On September 9th, KO Boxing held it’s third boxing event of the year at a packed Shaw Conference Centre which was headlined by Red Deer’s “Irish” Cam O’Connell (12-0-1, 8 KO’s) who is ranked number four at lightweight in Canada against former Olympian Norbert Kalucza (11-2, 6 KO’s) of Hungary.

At the opening bell of the main event, O’Connell seemed to be a man possessed. He went straight at Kalucza and did not let off the gas while landing hard, thunderous shots on the Hungarian fighter. Kalucza had nothing to offer in return for the beating he took. Kalucza would taste the canvas in the second round, which seemed to awaken him a bit but would go down again in the third round before the referee waved off the bout. 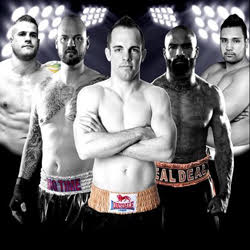 In the co-main event, Ryan “The Real Deal” Ford (8-0, 5 KO’s) had to work hard in his first fight at home since fighting overseas in Asia to earn a hard-earned unanimous decision victory over Victor Palacios (13-13, 8 KO’s) of Guadalajara, Jalisco, Mexico. Ford’s jab was able to land at will but Palacios was determined to bring the fight to the hometown fighter. Boxing fans saw plenty of action in the first round and the two fighters did not let up off the gas for the remainder of the fight as the two gave and took a lot of power punches. While Ford was the victor, the decision did bring out some boos throughout the crowd.

Former CFL rookie of the year Adam “The Boogeyman” Braidwood (5-1, 4 KO’s) made quick work of Adam Querido (2-1, 1 KO) with a first round knockout. Some ringside members of the media thought the fight would go the full four rounds as the two had fought each other twice as armatures with both fights going the distance but that was back when headgear was used. Braidwood proved that in the pro’s it’s a totally different game and flattened Querido face-first.

Hometown giant (6’10, over 300 lbs) Brad “Big Time” Switzer (2-0, 1 KO) went the distance against Dean Storey (9-17, 5 KO’s). Switzer used his size to his advantage and was able to land hard shots on Storey but Storey held excessively throughout the fight causing the action to be slow. Switzer was able to land hard shots that seemed to shake Storey but the man from New Brunswick refused to go down. Instead, Switzer had to settle for a unanimous decision victory.

Anthony “Hits Hard” Lessard (10-9-2, 6 KO’s) erased any doubt of his unanimous decision victory over Dia Grant (1-9, 1 KO) from last year with a knockout victory in the fourth round. Lessard was in control throughout the fight and his punches were harder and more accurate which sealed the deal for him.

Hometown favourite Stan Surmacz Ahumada (6-0, 4 KO’s) had to settle for another unanimous decision victory last night against former UFC fighter Tim Hague (1-1, 1 KO). The two started out at a decent pace but Ahumada appeared to be very cautious of Hague’s power. It would be Ahumada’s activity level and punch accuracy that would seal the deal for the victory.