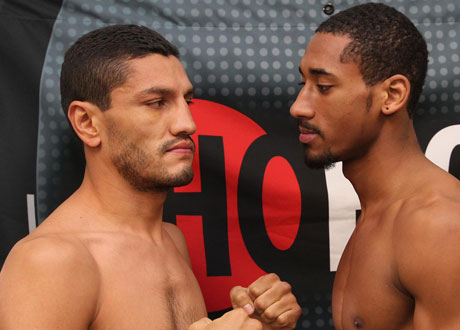 Star Boxing and Banner Promotions are putting on a dynamic and well anticipated attraction scheduled to be held at the Paramount Theatre located in Huntington, New York on ShoBox: The New Generation, on Friday, January 25, 2013.

The feature bout will unfold in the talent engulfed junior middleweight division.  This will be a 10-round clash between undefeated contender Demetrius “Boo Boo” Andrade, fighting out of Providence, Rhode Island, who has the unblemished record of (18-0, 13 KOs’) vs. Freddie “El Riel” Hernandez, fighting out of California by way of Mexico City, Mexico,  who also has a stellar record of (30-3, 20 KO’s).  This contest is of grave importance for both combatants as they will battle for the vacant WBO Intercontinental Title.

Demetrius Andrade is a 6’ 1” southpaw whom for most of his career was trained under the tutelage of David Keefe, Andre Rozier, and his father Paul Andrade, but is now being trained by well -respected trainer Virgil Hunter.  Andrade began his illustrious boxing career at the fledgling age of 6 in 1994.

Andrade is ranked #3 by the IBF, #3 by the WBO and #7 by the WBC.  Demetrius was an amateur sensation with vast international familiarity, he was thought of as the preeminent force of the 2008 U.S. Olympic team while advancing to the quarter finals.  This matter of elite amateur experience helped inaugurate and prepare him for the many challenges he has faced and those to come in the future.

Andrade proved to have relentless knockout power when landing a vicious straight left hand on Angel Hernandez in round 2 of their bout, also a first round knock- out against foe Rudy Cisneros.  In spite of the height and reach advantage, not to mention his astounding combinations and competence in utilizing punching power with both hands, in my opinion Hernandez will without a doubt be Andrade’s toughest test to date.  Freddie Hernandez is a very tough and always game fighter with a come to win mind set and never just looks as if he is trying to survive, which is why this is going to be a meaningful and breathe taking battle.

Hernandez is 9 years the elder of Andrade, at the rightful age of 33 and has the rounds and experience to show for it.  Hernandez also happens to have thunder in his gloves and in his most recent contest, he did happen to lose a unanimous decision to the boxing sensation in Erislandy Lara.  Let’s not forget, Lara was also a southpaw as is Andrade, which could mean big problems for the Mexican “Rail” (El Riel).  Never the less this fight will not be a cake walk for Andrade, Hernandez has wins over a number of former world champions and contenders such as Luis Collazo, who in my just about perfect eyes gave Ricky Hatton all he could handle while Manchester’s son was in his prime.  Hernandez also defeated Mike Anchando and Demarcus Corley.

I think Hernandez is more of a tough and overly robust warrior who will have to make this an ugly brawl. His best hope is to try and make Andrade as uncomfortable as he possible can.  He will have a better chance at winning and moving on the next step towards a world title if he can quirk Andrade out of getting set into his Paul Williams like rhythm, which I personally don’t see happening. For Demetrius is undisturbed and exceedingly focused when placed under pressure.  I honestly believe this huge test will show Andrade’s true potential in this star studded division and the best will be brought out in Andrade via late round stoppage; due to the fact he will be ready for the long haul.  Just keep in mind styles make fights and anything can and will happen.

There is also a well anticipated co-main event in the Junior Welterweight Division between two fighters each with only one loss a piece.  Raymond “Tito” Serrano, fighting out of Philadelphia, Pennsylvania with a record of (18-1, 8 KO’s) will be facing off against Emmanuel “Tranzforma” Taylor, who hails from Edgewood, Maryland with a record of (15-1) and trains in Baltimore City.

Emmanuel had this to say about his upcoming bout “I’m familiar with Serrano, I know him from the amateurs, he was in my region, so we fought, he was a little bit older than me and he is a good fighter, good boxer, I give him credit, I’m just going to use my jab and pressure and that’s what going to win me the fight.” He continued, “I’ve worked hard in the gym and I’ve been getting ready in Baltimore since December 1st, I have a lot of styles, I can box or bang but basically I usually box”.

Serrano also had a few words to say, “I haven’t seen any of Taylor’s professional fights, but I do remember him from our amateur days, I’m looking forward to starting the New Year off right. I’ve learned a lot from my loss and want to accomplish my goal to become champion of the world.”

Both of these fighters are similar in size with a three year age difference.  Serrano is 25 and Taylor is 22, therefore this fight is a very evenly matched contest.  The main difference is Taylor has pretty fast hands with good foot work and relies heavily on his jab, whereas Serrano is for the most part a boxer puncher with more pop in his hands.  I personally have watched a lot of Taylor’s bouts in which he used his boxing pedigree to win all but 1 bout.  It will be vastly noteworthy to see which one of these youthful future luminaries will utilize their identifiable techniques to move on to the next level of bigger and brighter stages of their respectful careers.

This is the reason that I feel ShoBox is so important, not just for the young fighters featured on this eminent program, however to true boxing enthusiasts all over the globe.