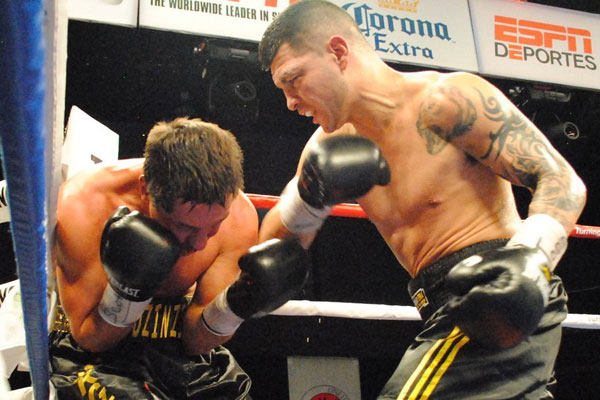 The January 25th edition of ESPN’s Friday Night Fights  was certainly one to remember. In a season that has thus far been shadowed by questionable judging and controversy, all fighters came out with the intent to end each of their match-ups both violently and decisively.

In the televised cards opening bout, highly-touted prospect Tony Luis (15-1, 7 knockouts) took on last minute opponent, Jose Hernandez (14-6-1, 6 knockouts) in a junior welterweight bout. With Luis’ original opponent (Miguel Gonzalez [20-3, 15 knockouts] bowing out of the bout due to illness, many felt that Hernandez would get run over by Luis considering he was taking the bout on less than two weeks notice. Boy, were those fans wrong,

The opening round began with what many people expected. Luis took over early with his blazing fast combinations to the head and body of Hernandez. Hernandez decided to answer these combinations with his own swinging hooks which seemed to land about as often as they missed early on. This pattern continued as Luis continued to outmaneuver the thudding Hernandez, all while landing his constant flurry of combinations. Things didn’t look good for Hernandez, but things quickly began to grow more and more interesting.

Round 2 began much the same way as the first one. Luis continued to outwork Hernandez, but without much power behind the shots, seemed poised to earn a dominant decision win. Suddenly, Luis got caught with one of Hernandez’ looping hooks, and it sent the prospect reeling to the ropes.  With Hernandez earning himself a round, the fight went from what should’ve been a slaughter, to a match-up that pit speed against power.

Rounds 3 through 6 were a constant back and forth between the two fighters that left fans wondering whether judges would favor Luis’ output, or Hernandez’ few, but more effective shots. In the 6th, things once again went sour for Luis, as Hernandez belted him with a straight right stunned Luis badly for the final 30-seconds of the round. Luis would answer the bell for the 7th round, but even his fairly recovered state, he was absorbing too many of Hernandez’ power shots.

At the start of the 8th round, Hernandez lands a beautiful straight-right that once again wobbled Luis. As Luis tried to recover, he would eventually find himself knocked down by a left hand from Hernandez. With Luis intent on surviving the round, Hernandez began to really pour it on in an attempt to end the fight. With the final seconds ticking, Luis’ corner threw in the towel after seeing the prospect absorb nearly all of Hernandez’ power shots. It was a huge upset that was not only entertaining, but interesting in all the questions that arise following the bout.

The next bout was an earlier under-card bout that featured young up-and-comer Antoine Douglas (4-0, 3 knockouts) vs. Emmanuel Medina (2-3-1, 2 knockouts) in a 4-round fight. There is not much to say about this fight except for the fact that Douglas dominated from bell-to-bell. With Medina acting as little more than a punching bag, Douglas was able to show flashes of brilliance, along with solid technique. Douglas earned the one-sided unanimous decision and moves on with his career, where as Medina remains unsure about where his may stand. The verdict is still out on whether Douglas could become an eventual superstar in the sport, but he’s definitely proving to be one fighter worth watching.

In the main event, battle-tested and always hungry, Brian Vera (22-6, 13 knockouts) faced the always tough, Sergiy Dzinziruk (37-2-1, 24 knockouts) in a fight that would potentially earn the victor a shot at one of the middleweight divisions major champions. Going into the bout, many doubted Vera’s chances against Dzinziruk. After all, Dzinziruk was a man who made a career out of making good fighters he faced look bad. Brian Vera proved to be the exception to the rule.

At the opening bell, both fighters came out aggressive, and Vera quickly proved to be the more effective fighter. With a combination of hooks and straight-rights, Vera was stunning Dzinziruk to many peoples’ surprise. All of a sudden, Vera dropped Dzinziruk and seemed poised to earn a first round KO victory as he continued to pour it on. To his credit, Dzinziruk survived the late barrage and managed to answer the bell signaling the start of the second round.

Vera’s aggression could quickly become the story of this fight, as Dzinziruk continued to struggle against the former “Contender” star. Things finally managed to pick up for Dzinziruk in the later rounds, as he managed to establish his distance behind a smart jab that seemed reminiscent of his previous in-ring exploits. Arguably, Dzinziruk best work came in rounds 6 and 8, but it was quickly obvious that he wasn’t going to win a decision should the fight make it to the judge’s score-cards. Unfortunately for Dzinziruk, it didn’t even make it to the end of the 10th round. With a final barrage of punches, similar to that of earlier rounds, Vera managed to put away and put down Dzinziruk with 1:50 remaining in round 10. Vera always said he has the capability to beat any of the top fighters in his division, and following this victory of Dzinziruk, he’ll finally be able to prove it.