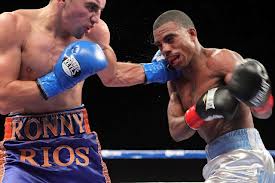 Also in action will be unbeaten phenom Diego De La Hoya who will make his fourth appearance in Indio in a six round opening televised fight against an opponent to be announced and visiting Fantasy Springs Resort Casino as the special VIP guest to meet and greet fans will be International Boxing Hall of Famer, president and founder of Golden Boy Promotions, Oscar De La Hoya.

“It’s always an exciting night when we can put on an event at Fantasy Springs and this will be no exception,” said Oscar De La Hoya. “Ronny Rios and Antonio Orozco are two of this area’s most talented fighters and we’ll see if they’re ready for the next level on October 9. I’m also looking forward to seeing the new De La Hoya era take charge with my cousin Diego in the ring again and meeting everyone on fight night and talking about this great sport and what we can do to make it even better.”

Santa Ana’s Ronny Rios (23-0, 10 KOs) can do it all in the ring and that ability has led him to an undefeated record in one of boxing’s toughest divisions. A standout amateur that transitioned smoothly to the pro game, the 24-year-old began making big moves in 2013, starting with his defeat of former world champion Rico Ramos for the NABF title. Since then, Rios has added three more wins, most recently defeating Andrew Cancio in April.

Celaya Guanajuato, Mexico’s Robinson Castellanos’ (19-10, 12 KOs) record can be deceiving as the the 12-year professional hit a late stride in his career. The 32-year-old had a a rough start but has now boiunced back and won 11 of his last 12 bouts, including victories against Celestino Caballero and Derrick Wilson.

Well deserving of the nickname “Relentless,” Antonio Orozco (20-0, 15 KOs) of Tecate, Baja California Mexico who now lives and trains out of San Diego, is a fearsome force in the ring, and he’s prepared to make his move toward a world title shot in 2015. With 2014 victories over veterans Miguel Angel Huerta and Martin Honorio, the 26-year-old knows another notable victory against Steve Forbes will help him make his case for a shot at the division’s elite.

A seasoned veteran whose world championship experience has earned him respect throughout the boxing world, former Junior Lightweight World Champion Steve Forbes (35-13, 11 KOs) believes that at age 37, he still has another title run left in him. Hailing from Los Angeles, Forbes has been in with the best of the best over the years, including Oscar De La Hoya, Andre Berto, Cornelius Bundrage, Carlos Hernandez and John Brown. On October 9, he aims to use his experience to hand the younger Orozco his first loss in Indio.

Just 20-years-old, Mexicali’s Diego De La Hoya (6-0, 5 KOs), who will be fighting an opponent to be determined, has made remarkable progress since turning professional in September of 2012. Unbeaten in four 2014 bouts, “The Golden Kid” is coming off of a fifth round technical knockout over Miguel Tamayo in his Las Vegas debut in July.