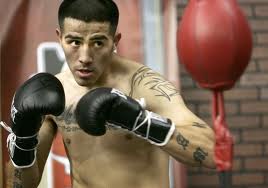 This week marked the second fight made between Top Rank and Golden Boy since the thawing of the “Cold War” began a few months back, when the “Golden Boy” himself, Oscar De La Hoya, sat down with Top Rank chief Bob Arum and hashed out some of the differences that has plagued their relationship over the past few years.

They’ve made a couple of pretty good fights thus far.

Then, just a few days ago it was announced that interim WBA junior welterweight titlist Mauricio Herrera would defend his title against Jose Benavidez Jr. on the televised undercard of Timothy Bradley’s comeback fight against Diego Chaves.

Both of these are solid fights with the potential for competitive action. However, and I’m not trying to be “that guy,” these aren’t the blockbuster fights that we imagined when considering the implications of a Golden Boy-Top Rank reconciliation. I’m not complaining, not at all. I’m just being honest, and a boxing fan.

We will take what we can get for now, and fans should be patient because it is a process. The two promotions have to start somewhere and these fights are plenty good to start with, and it won’t take long before the dialogue increases into bigger, more complex cross-promotional matchups. It is a complicated sort of affairs and the bigger the matchup the more difficult the negotiations.

When the matchups present themselves then I’m sure both Top Rank and Golden Boy will work to develop them, such is the case with Saul “Canelo” Alvarez and Miguel Cotto.

One fighter that is anxious to get his hands on the rival promotion’s best talent is Brandon Rios. Rios has fought some of the best Top Rank has to offer and he has made some incredible fights in the process. His fights with Mike Alvarado have been so good that they had to do it twice and now there is talk of a rubber match in December.

We talk about the best fighting the best, but I’m much more interested in the best style matchups to be made between the two promotions. Rios isn’t the least flawed fighter out there and he will probably never grace the top 10 pound for pound list, but I’d rather pay to see him fight, depending on the matchup, than most of those guys in the top 10.

There are still some great in-house fights to be made with Rios, namely one with fellow action fighter Ruslan Provodnikov. However, there are some really interesting style matchups for Rios because of his ability to produce drama in the ring with almost any opponent.

The one potential hiccup is Al Haymon because he possesses a majority of the fighters we’d like to see Rios faceoff with and as game as Rios is for a potential fight outside his promotional stable, he knows that Haymon could present a major roadblock for some of them.

“That’s good [Top Rank and Golden Boy] are talking now and maybe we can make those fights, but I don’t know what the deal is with Al Haymon. I don’t know how that works because I know Al Haymon has a little control over them, too.

“It is what it is, but hopefully we can fight now. Since Top Rank [and Golden Boy] are talking now, hopefully those fights can be made, not just for the fans but also for business purposes,” Rios told Thaboxingvoice.

As far as potential matchups for Rios, there are far too many to mention. One does stick out and that is a matchup with Adrien Broner. There are some interesting dynamics to the fight.

First off, it is a great fight on paper. Rios and Broner possess opposing styles that could combust against one another. Also, Rios’ stable mate is Marcos Maidana, who gave Broner his first loss a year ago in dramatic fashion.

Rios and Broner have also mixed words on social media in the past, teasing fans about a possible matchup down the road. Rios believes that Broner should live up to his infamous nickname, “The Can-Man.”

“Like Broner says, he’s the “Can Man” and anybody can get it: Africans, Americans, Mexicans, Puerto Ricans. I guess I’m an American-Mexican, so I guess I can get it. If it makes sense then let’s do it. I would love to fight Broner, don’t get me wrong. I’m ready if he’s ready.”

Rios’ come forward style mixes well with Broner’s pure athletic ability, not to mention his vulnerability with being hit. Rios probably took a lot away from Maidana’s performance against Broner and based on that fight as well as the correlation between Maidana and Rios’ pressure tactics, one can assume a win is well within either fighter’s grasp.

“He (Broner) doesn’t like pressure. He’s not great when you’re pressuring him. At the moment, we’re not fighting him so I can’t really worry about what he’s doing.”