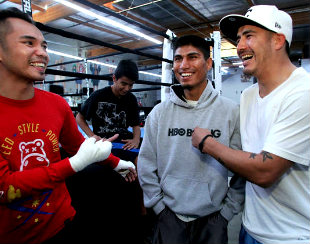 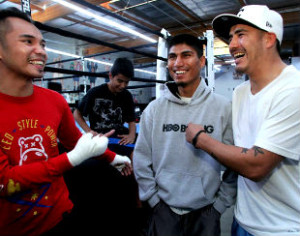 Former lightweight titlist Brandon Rios (33-2) has been trouble trying to land his next fight.

After IBF World welterweight titlist Kell Brook stopped British countryman Frankie Gavin in the sixth round at the O2 Arena in London on May 30, who Brook would fight next became the big question.

Brandon “Bam Bam” Rios was immediately one that came to the minds of many, including Matchroom Boxing promoter Eddie Hearn, who represents Brook. While talks have been going on for the fight, one man hasn’t been happy about how the negotiations have been going thus far. That’s been Rios’s trainer, Robert Garcia, speaking with FightHype.com

“Brandon wants the fight; we want the fight too,” said Garcia. “There’s a few little things that I’m already not liking. They already told us we weren’t going to be able to wear the MX Everlast gloves. They said the commission in London already banned those gloves.

“They’re worried. Why would they do it all of a sudden, like right before that big fight?” Garcia wondered.

“That’s something I’m already not happy with.”

Knowing that there is a chance he won’t land the fight with Kell Brook, Rios called out former welterweight titlist Victor Ortiz for a fight again, who has also called out Rios on numerous occasions as well, adding fuel to the fire in their ongoing rivalry.

“I’ll fight whoever’s out there, like Ortiz,” Rios laughed.

Rios was responding to a video he saw where Ortiz said he would fight Rios ‘in the ring or in the streets,’ and the audacious fighter known as ‘Bam Bam’ was left chuckling.

“He knows he doesn’t want me in the streets; he’s trying to look tough. I’ll fu** him up.

“He knows that from the amateurs, he knows that since we were growing up, I used to make him cry a lot.”

After a quick intermission in the bashing, Rios was not quite finished yet, as reporters pressured him to rant just a wee bit more.

“I don’t know what’s wrong with that dude, man. He looked fu***** punch drunk or something because that mother fu**** sounds stupid dude.

“He’s trying to make himself sound tough, but he’s a bi***; he already knows that.”

Ortiz has been knocked in three of his last four fights and has earned a reputation for being a quitter.

In a close fight against Marcos Maidana in 2009, a fight where both men had tasted the canvas multiple times, Ortiz quit and was lambasted by many in the boxing media for not wanting to continue.

The issue resurfaced in 2011 after he broke his jaw in a fight against Josesito Lopez in the ninth round. Despite his corner’s pleas to continue, Ortiz quit.

“I’ll take that fight in a heartbeat. I already called him out in my last fight, and he didn’t want nothing.

“We’ll wait until he gives us an answer.”