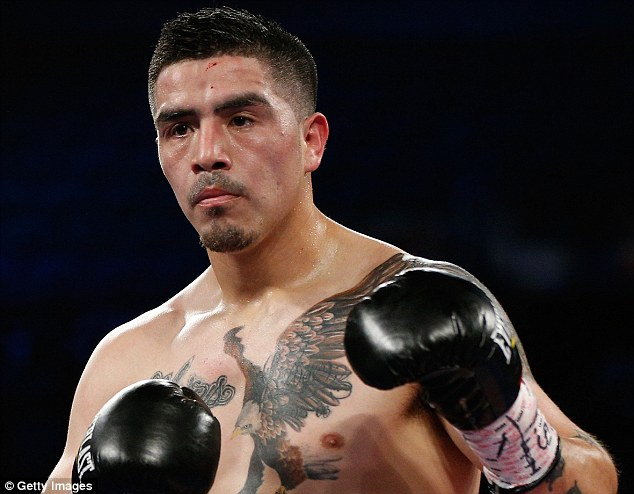 These four warriors boast a combined record of 107-3-1 (60 KOs) — a winning ratio of 96 percent with over half of those victories coming by way of knockout.

“This is a do or die fight for me. I know this fight is very important for my career. I am training extremely hard,” said Rios from his Oxnard-based training camp where he has been ensconced for the past six weeks.
“I cannot wait to be in the ring and perform in front of my hometown crowd,” said Vargas. “I am very happy that my first world title defense will be in my hometown and that my friends, family and fans will all be part of it.”

“The entire boxing world always eagerly anticipates Brandon Rios’ return to the ring. His in-your-face style of fighting keeps fans glued to the action,” said Top Rank president, Todd duBoef. “The Cosmopolitan of Las Vegas will be hosting boxing at the highest level on August 2 as HBO will open the telecast with local hero Jessie Vargas in his first world title defense.”

Rios (31-2-1 (22 KOs), the former WBA lightweight champion, from Oxnard, Calif., is on the hunt for his second world title in as many weight divisions. Thirteen of his last 16 victories have come by way of knockout. One of boxing’s most exciting fighters, Rios is known for his all-action fan-friendly fighting style. His trainer, former International Boxing Federation (IBF) junior lightweight champion and 2012 Trainer of the Year Robert Garcia, calls it a “throwback” style with a warrior’s mentality that screams excitement. Highlight knockout victories on Rios’ resume include Miguel Acosta, Anthony Peterson, Urbano Antillon, John Murray and Mike Alvarado. Alvarado, the natural 140-pounder, entered that fight as the undefeated WBO No. 1 junior welterweight contender. Many consider it 2012’s Fight of the Year. In their exciting rematch, which took place on March 30, 2013, Rios lost a close decision for the vacant WBO interim junior welterweight title. It was considered a finalist for the 2013 Fight of the Year award. In his last fight, on November 24, 2013, he lost a unanimous decision to Fighter of the Decade Manny Pacquiao, headlining a pay-per-view event that emanated from Macau, China.

Chaves (23-1, 19 KOs), of Buenos Aires, is a power puncher who stalks his opponent with only one goal — THE KNOCKOUT! His victory by knockout ratio of 83% proves it is usually “mission accomplished” for him. Chaves will be making his Las Vegas debut on this card in only his second fight outside his native Argentina. He captured the WBA interim welterweight title in 2012, knocking out defending champion Ismael El Massoudi in the second round. Chaves’ one-year title reign included a successful title defense against José Miranda, where he scored another second-round stoppage. He lost the title to Keith Thurman last July. Chaves’ last fight was a third-round TKO of Juan Godoy on February 15. He is currently world-rated No. 7 by the WBA and No. 10 by the International Boxing Federation (IBF).

Vargas (24-0, Nine KOs), of Las Vegas, Nevada, will be making his world champion debut a homecoming. He captured the WBA super lightweight title on April 19 in Las Vegas, winning a unanimous decision over undefeated defending champion Khabib Allakhverdiev. It was a close and competitive fight that proved Vardas’ grit as he bit down hard during the championship rounds to pull away with the victory and the world championship belt. Vargas has proved himself a very popular ring performer in his hometown with nearly half of his fights taking place in Las Vegas. His impressive resume includes victories over former world champions Stevie Forbes and Vivian Harris and top contenders Josesito Lopez, Lucky Boy Omotoso, Ray Narh and Lanardo Tyner.

Novikov (29-0, 10 KOs), of Kopeysk, Russia, is a southpaw with good skills and movement. After a strong amateur career he seamlessly made the transition into the professional ranks in 2006. He captured the World Boxing Council Silver welterweight title in 2012, winning a unanimous decision over Karlo Tabaghua. He returns to the ring fresh from a 10-round unanimous decision victory over Javier Castro on May 17 in Fresno, California, where he blitzed him winning every round on the three judges’ scorecards.