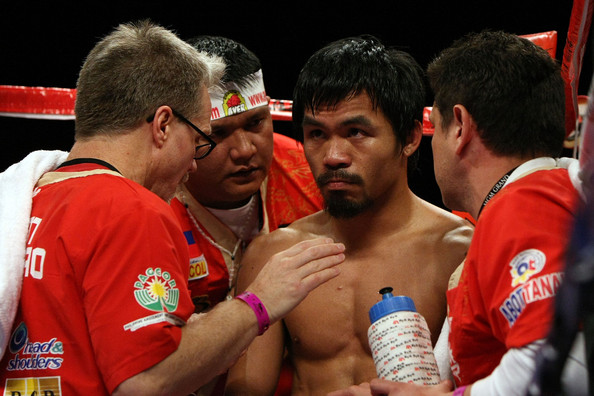 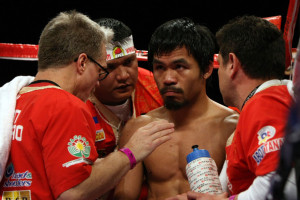 Freddie Roach, fresh off his fighter Manny Pacquiao’s destruction of Chris Algieri sat down with UCN Live’s Steve Kim in probably one of the most candid interviews Roach has done. Roach was happy with Pacquiao’s performance and claims Manny Pacquaio is back

“Manny Pacquiao is definitely back,” Roach said. “He trained really hard in camp His activity is much higher and his legs was great. He was on his toes and went he hurt him, he was going after it but Algieri is a pretty durable guy. I think if he wasn’t so durable Manny would have stopped him. That one knocked down where it was close to 10 second left in the round was close. If we had more time we would have stopped him.”

The obvious question after Pacquiao’s win is will Floyd Mayweather and Manny Pacquiao actually fight now? Roach says Manny is doing his part and instead of the typical ‘leave it up to my promoter answer’, Pacquiao has dropped Mayweather’s name multiple times and even poked fun at Mayweather in a Footlocker commercial.

“There’s been a lot of talk. I’m hearing a lot of good things,” said Roach. “I told him (Pacquiao) every time you get a chance call him out. The nice guy routine didn’t work, so he made the commercial making fun of Floyd. We need to force this guy into the fight somehow. I think Floyd’s a little embarrassed so I honestly think it has a chance.”

Roach was asked if Mayweather wants the fight and how the fight could be negotiated after 5 years of it going by the waste side.

“I don’t know that (Mayweather wanting the fight), explained Roach. “ I had a meeting with Les Moonves of CBS. He asked me can we make this fight happen. I said ‘we could but it’s going to take a lot of good negotations. Why don’t you get a neutral guy to negotiate that fight, someone honorable like Bill Clinton because you know there’s too much tension between Al Haymon and Bob Arum. They all don’t get along’.”

Roach concedes the Mayweather is slightly the bigger draw but also wants fair negotations to make the fight.

“We know that he’s the a-side of the fight. We know it’s a 60-40 split in his favor not 70-30. He’s going to get most of the negotiations his way but not all of them. That’s why we need a fair person to negotiate the fight.”

Many fans alike have chosen sides and those that have taken Pacquiao’s side have the inclination of saying Mayweather is scared of Pacquiao. Roach feels Mayweather isn’t scared but worried.

“No not scared, I think he’s a little worried about the style and the southpaw stance,” explained Roach. I won’t say he’s scared because fighters aren’t scared. We’ll fight anyone for the right money and right timing. I think he needs to be called out and I think he needs to be embarrassed and I think the press needs to get behind it. Because if Manny just says ask Bob, you have nothing to write about. If Manny calls him out, then you have something to write about.”

It was Roach’s plan to have Pacquiao call out Mayweather

However Roach feels it’s now or never. “This is it,” explained Roach. “It’s been 4 years. If they don’t do it now, it’ll never happen.”

If the fight materializes, Roach feels it is Pacquiao who he considers the favorite

“I think it’s good for us,” stated Roach. : I’ve had my game plan for a while now. Manny’s legs were really good in the fight and Floyd’s weren’t in his last fight. 3 years ago it’s 50-50. I think now we have the advantage because Floyd’s a little shot.”