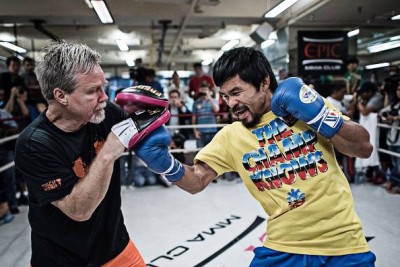 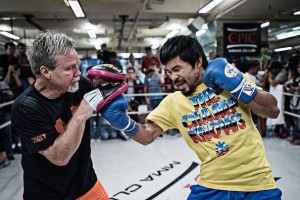 As boxing fans anxiously await for Floyd Mayweather Jr. and Manny Pacquiao to get into the ring and settle their differences on May 2, Freddie Roach remains adamant that if Mayweather had it his way, the fight would have never happened.

After seeing pictures of Mayweather swimming in preparation for his fighter, Roach laughed.

“I saw pictures of Floyd swimming; I love it,” said a laughing Roach. “First time in his life he’s going to try something new in the biggest fight of his life? Give me a break. He’s trying everything he can to get himself ready for the fight, but he’s going up the wrong tree.”

Roach believes that Mayweather is training vigorously for the fight out of desperation to get himself in top shape for Pacquiao.

“I think the public forced him into this fight, he doesn’t want to fight us,” Roach insisted.

I have to disagree. Mayweather is training hard because that’s what he is supposed to do. It may be difficult to persuade hardcore Pacquiao fans, but it’s possible that Mayweather’s decision to wait as long as he did was purely a business decision. The bad blood that has existed between both camps for the past five years is still there.

The man that was credited for many of Pacquiao’s victories from his rise from lightweight to welterweight, strength & conditioning coach Alex Ariza, is now working with Floyd Mayweather Jr. Roach fired Ariza in August 2013. Roach noted in an interview with media that Ariza was “shady” and would give drinks to Manny Pacquiao, but would never tell Freddie what was inside the drinks.

“One of the reasons I don’t work with him (Ariza) anymore is he’s a little shady. He used to give Manny a drink before workouts, and I asked him what was in the drink and he would never tell me. I told him I need to know what was in the drinks because you’re giving it to my fighter.”

In an interview with USA Today, Roach described the fight as “good vs. evil” and reiterated that Pacquiao’s deep dislike for Mayweather will ultimately decide who wins on May 2. Roach added that Pacquiao’s feelings towards Mayweather emanated from the undefeated pound-for-pound king’s history of domestic violence against women, which has escalated Pacquiao’s intensity and motivation in the gym.

“Manny is really against domestic violence,” Roach said. “It is a big issue in the Phillippines for him and being a congressman, he can control some of that stuff. That is a big plus for me that Manny does not like the guy. I think the killer instinct is going to come back a lot faster.”

Mayweather (47-0, 26 knockouts) spent two months in jail for domestic violence against Josie Harris. Harris is the mother to three of his four children, which was witnessed by two of Mayweather’s sons – according to their recorded police statements. Mayweather has been implicated in seven instances of alleged physical assault against five different women but has only served time once.

Ironically in 2001, Mayweather fought what was then the biggest fight of his career against Diego Corrales, who was facing an impending jail sentence for assaulting his wife. Mayweather pummeled Corrales and dedicated his performance to “all the battered women in the world.”

In 2009, Mayweather insinuated that Pacquiao was under the influence of performance-enhancing drugs. Furthermore, Mayweather made a racist internet video where he referred to Pacquiao as a yellow (expletive) and continued to dig himself in a hole.

“Once I stop the midget, I’ll make that mother (expletive) make me a sushi roll and cook me some rice.”

Pacquiao eventually sued Mayweather for defamation and scored a legal victory. The case was settled out of court with Mayweather paying Pacquiao an undisclosed seven-figure sum.

Strength & conditioning coach Alex Ariza is now working with Floyd Mayweather Jr. Roach does have a point given that this is the first time that Floyd has used such a coach, but I think the man just wants to collect $180 million and stay undefeated.

There is so much on the line in this fight. There is bad blood between the camps, the trainers, the coaches. Their drive is only motivating their respective fighters to put on the absolute best performance for all the fans that attend the fight at MGM Grand on May 2 and the millions of fans who will be tuning in on PPV. The fighters will have the final say, but only one will make it out on top.