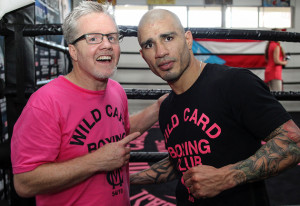 Pugilistic pundit Freddie Roach is a throwback trainer; one who firmly believes that two equal talents in the same division make for competitive fights, regardless of size.

It is no secret that WBC middleweight champion Miguel Cotto (39-4, 32 KO), trained by Roach, is the smallest of current middleweight titleholders. Cotto, who began his career in 2001 at 140 pounds, made the move to middleweight last summer. He stands at 5’7’’ according to boxrec.com while fellow titleholders Gennady “GGG” Golovkin tops out at 5’10 ½ ’’, and Irish champ Andy Lee stands at a whopping 6’2’’.

“Well (Cotto) was much smaller than Martinez also and he kicked his ass, I mean size doesn’t really mean much in boxing,” proclaimed Roach, regarding the size disparity of Golovkin and Cotto.

Roach developed one of boxing’s biggest sensations in Manny Pacquiao and in 2010 shocked the boxing world when the two decided to campaign at junior middleweight to face Antonio Margarito. The night of the fight, Margarito was 4 ½ inches taller and 17 pounds heavier than Pacquiao. However, the size could not save Margarito from the whirlwind of punches stemming from Pacquiao, who became the first boxer to win world titles in eight weight divisions.

Last June Cotto made history as well, under Roach’s tutelage, by beating Sergio Martinez and becoming the first Puerto Rican boxer to win titles in four weight classes. The win has also made Cotto the most sought out champion among middleweights, particularly by GGG.

Golovkin (31-0, 28 KO) walked through Marco Antonio Rubio for the WBC interim strap and will be fighting Martin Murray (29-1-1, 12 KO) on Feb. 21st for the WBC’s number one challenger spot. A victory over Murray makes GGG a mandatory challenger for Cotto’s WBC belt should Golovkin win, and many expect him to. 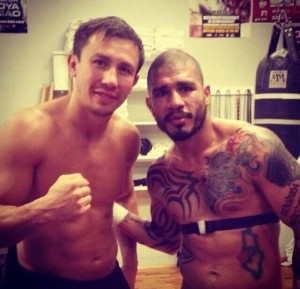 In an interview with FightHype.com Roach was asked about a potential showdown between Cotto and GGG. Roach has a deal with Cotto adviser Gaby Penagaricano in which names are given to Roach, and he picks the one he feels is the best for Cotto.

“(Penagaricano) gives me three names and asks me who I want to fight out of those three names, and that’s my piece of the pie,” said Roach. “And that doesn’t mean it’s decided either, I just give him my opinion and why I think it’s the best fight for him at that point.”

Of course the obvious questions now are: Is Golovkin’s name on that list? And if it is, will Roach pick him?

“It’s never been brought up to me yet,” said Roach, regarding GGG’s name on the list.

Abel Sanchez, who trains Golovkin, is as confident in his ward as Roach is and predicts a fifth round knockout for GGG should a fight between him and Cotto ever take place. Roach responded by bringing Golovkin’s resume into question.

“So the thing is you know, I think it’s a very competitive fight,” said Roach. “I think he hasn’t fought anybody yet. I mean these names he’s been fighting, I mean they’re not that good let’s face it.”

However, Roach acknowledges that Golovkin has been well schooled in boxing. Trained by the renowned Eddie Futch, Roach believes that ring generalship is a lost art, privileged to those like himself who benefited from the teachings of a bygone era.

“The thing is, I do think that (Golovkin’s) ring generalship is really good, I like that, I’m not sure if he got that from Abel or the amateurs. He impresses me with his ring generalship, which is not taught any more to fighters. But my fighter knows it well also, how to control the ring. And it’s something that most people don’t even know about nowadays. I mean I learned from the great Eddie Futch and the guys like that are gone.”

Another name being mentioned for Cotto is Timothy Bradley (31-1-1, 12 KO), who Roach knows well as a former Pacquiao opponent. Bradley split a pair of fights with Pacquiao in 2012 and 2014 and although many feel Pacquiao easily won both fights, Roach regards Bradley as a tough opponent for anyone.

“You know Tim’s a tough guy with anybody. I mean he’s a very hard guy, durable guy, in good shape. Depending on who the other two were that they mixed him up with if they could give me three names, I’m not sure what choice he would be without knowing those other two names.”

For now Cotto is still weighing his options, although GGG may take matters into his own hands quite literally against Murray. Some critics think Cotto will avoid Golovkin, believing in Sanchez’s prediction. However, Roach is unafraid.