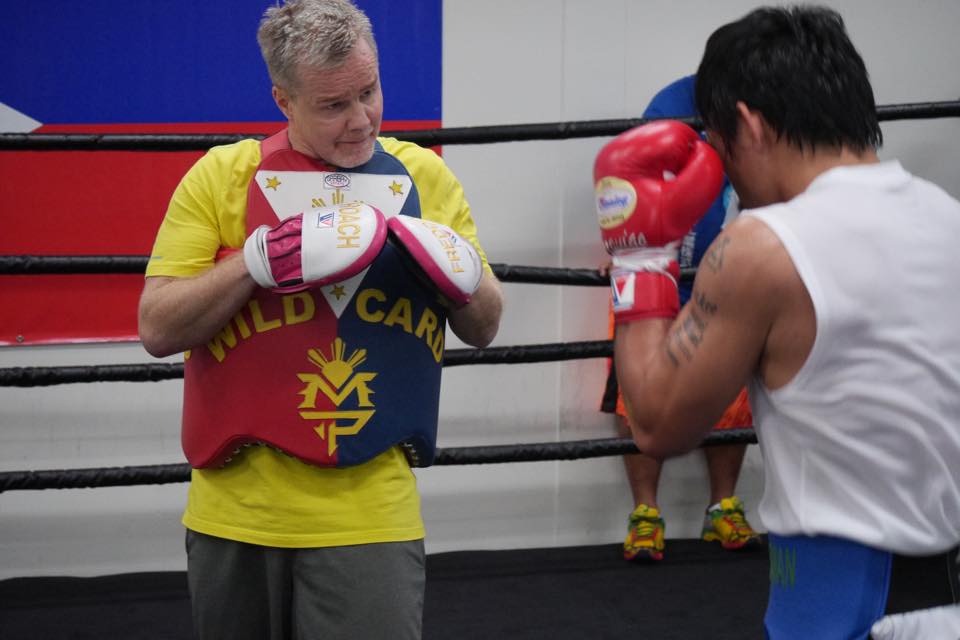 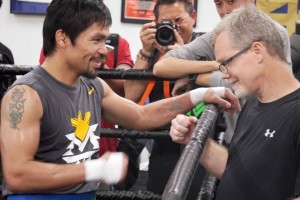 FightHub’s Marcos Villegas was able to speak with Freddie Roach for a few moments to get his thoughts on the only fight that seems to matter at the moment. The upcoming mega-fight between Floyd Mayweather and Roach’s longtime fighter Manny Pacquiao.

Surprisingly, Roach chose to show his cards a little and described some of the strategies that he would like to see Manny employ during the fight. Considering the steps Roach has taken to ensure super-secrecy during the training for the fight, his comments may need to be taken with a grain of salt, but it is a strategy that makes sense nonetheless.

Freddie Roach said, “It’s really key that we are in and out of the pocket really quick though because if you stay in the pocket for more than two shots with Mayweather, he’s gonna hit you back… you take two shots, make him miss, come back and counter that back in you’re gonna have more success… It’s all about timing and settin’ it up.”

At the time of this interview, Manny Pacquiao had yet to begin sparring but Mayweather’s sparring sessions have been well underway and with them have come many tall tales from the Mayweather gym. Freddie commented on the Mayweather sparring stories and had one of his own.

“I know that Mayweather started [sparring] already, knocked out a couple girls or something like that… the thing is, I did get a report from one of my friends in Mexico that one of the young Mexican boys that beat the shit out of him two days in a row.”

So there you go… another tale has been told. Do I believe it? Eh, not really but I love that Freddie is will to say it anyway. Roach was also willing to talk about his past successes and ultimate failure against Mayweather.

“I did face this man before when I had De La Hoya fight’em, I did beat him for six rounds but then we lost the plot a little bit, we lost the last six rounds, but I did think that fight was pretty close.”

The thing about Freddie is that he remains realistic. As he was saying that last bit, my immediate reaction was to say to myself “… but Manny and Oscar are totally different fighters.” but then in his next breath Roach acknowledged this fact and further explained himself.

“… really Manny Pacquiao is not like Oscar but there are similarities with how Mayweather won that fight because of the traps that he set that Oscar walked into[They] were very good moves by Mayweather.”

It’s that kind of awareness that lends additional weight to his statements. He has clearly thought things out. He isn’t just spouting nonsense for the helluva it.

Roach is not a believer in the “Mayweather plays jazz” theory that everyone buys into. The theory in which Floyd doesn’t watch any fight tape on his opponents… he just goes into the ring and improvises. Much to the contrary, Roach is saying that Mayweather has his go-to moves, and he knows what they are and how to recognize them in the ring.

“I’ve shown Manny [Mayweather’s] favorite moves, the one he makes, he sets you up and walks you into a shot and Manny has to recognize what is being set up and take that away. It’s very easy to do so the experience I have in fighting him in the past will help us in this fight.”

So, how did Roach conclude this interview? With one of his patented dismissive shots at his opponent of course!

“You know everybody says this guy is undefeated and stuff like that but remember he lost in the Olympics, he lost in the amateurs, he wasn’t the best amateur in the world. I don’t think he ever won the nationals… he’s tasted defeat before, and he will taste defeat again.”

I’m a Freddie Roach fan. He gives really informative accounts of what is on his mind and never skimps on the great soundbites. In this interview alone, he gave me 3-4 different options for a nice title that will capture your attention and get some additional readers on my work. I agree with most of what the guy says. Maybe it’s a little silly going all the way back to Mayweather’s amateur days but it’s all part of the game and Freddie plays it as well as anyone.

See Freddie Roach and Floyd Mayweather Sr. send two of the best fighters in the world up against each other on May 2nd, live from the MGM Grand Garden Arena in Las Vegas.