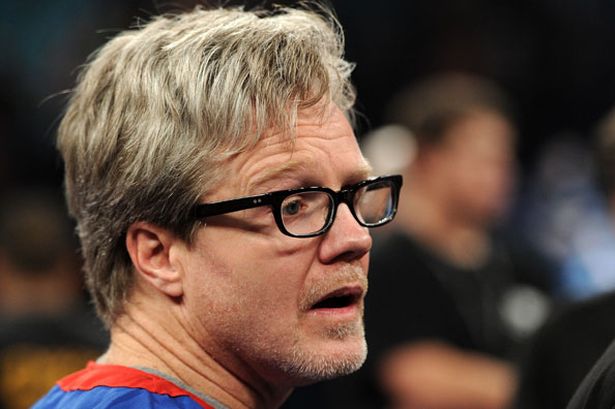 After the fight between Ruslan Provodnikov and Chris Algieri was over, the usual press conference commenced with the usual members, the fighters, trainers, and promoters. However, after the official press conference was over, Hall of Fame trainer, Freddie Roach was nice enough to stay and answer a few more questions from the reporters that had stayed. In this, part one of two, the focus will be centered on this fight for Provodnikov, what he could have done differently, and Roach’s thoughts on the new champion Chris Algieri.

Roach was asked about the decision and how it seems like judges are starting to side more with the technical rounds and giving the person with more punches the rounds over the ones who deliver more punishment and if he was worried about that since he is an offensive type guy. Roach said, “That’s (expletive). Defense doesn’t win fights. You don’t get a point for making a punch miss. Power punches win fights. He maybe out-jabbed us, but power punches, it was 1000-1, we landed most and that’s why I think we deserved the fight.”

I asked Roach about how he felt going into the 12th round. He already said he thought they were ahead, but I wanted to know if he felt it was close and how what did he tell Ruslan to do, depending on that. Roach said, “I thought we were ahead, but I thought it was a close fight and I told Ruslan to put him on his ass, tried to motivate him a little bit. I always like my guys to finish strong and I did tell him to put him on his ass. I thought he went out there and fought a very good round.”

There were numerous grumblings about Provodnikov getting a Pacquiao fight if he won this one. So Roach was asked if Ruslan was possible looking ahead of Algieri. Roach replied, “Maybe. He wanted a bigger name, the beginning of training camp was a little slow, he wasn’t motivated, we talked about ‘This is the guy in the way right now and we can get those guys later.’ The 2nd half of training camp went really good. But I’m not using that as an excuse cause the 2nd half of camp went well.”

When asked if he had any regrets or would do something strategically different if he had to go back in time and do this fight over or for a possible rematch, Roach stated, “I’d do the same thing, because like I said, HBO had us winning by 10 points. I don’t see where this came from. I thought Ruslan fought a tough fight. I think we could have gone to the body a bit more in the later rounds, but he was looking for the knockout. There would be some adjustments definitely, but overall I think it went okay. Winning and losing is part of life, this is what makes you a better fighter. We have to not roll over and die.”

Then Roach started to speak a bit more about his impressions of Algieri, saying, “He does have a very good jab and I think that jab would give anyone trouble. With that reach and that height, like if he was to fight Pacquiao that would be my main concern. Going into THIS fight, that was my main concern. The tapes I watched, he wasn’t the same. Ruslan started slipping that jab a littler later in the fight, but sometimes he ignores the jab cause he knows it can’t hurt him.” Roach also liked that the fight wasn’t stopped by the NY commission with Algieri’s eye. He said he likes when they let it go sometimes. “I think it was the right choice because he never quit.”

Roach said Pacquiao may consider Algieri if Pacquiao wanted to come back down to 140 lbs, however more than likely, Pacquiao is a 147 guy now and this was Algieri’s 1st step up in competition, so Algieri would need a little bit more seasoning before he could get a Pacquiao fight. Roach did say he admired Algieri for the heart he showed in the ring, saying a lot of guys would have quit with what Algieri had to go through tonight.