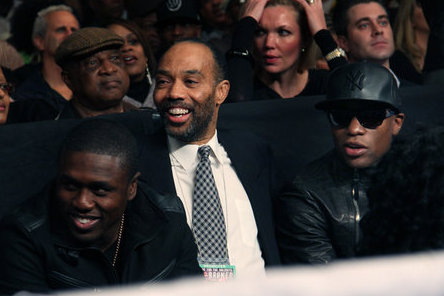 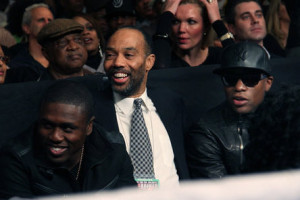 Regarding the speculation over whom will occupy the opponent’s bracket for Floyd Mayweather Jr’s next, and supposedly final, professional appearance in September. Trainer Robert Garcia told Elie Seckbach of Esnewreporting.com what he thinks about the two names that have emerged as the surprise frontrunners for the position.

Mayweather improved his pristine record to 48-0 with 26KO’s in his last fight in May against long-time nemesis Manny Pacquiao. In a dominant display, he put to bed all doubts of his supremacy as the best of this generation. He had been in more difficult fights before, but none represented as much as the Pacquiao win did in cementing his position at the top of the heap. His claim to being ’TBE’ or ‘The Best Ever’ becomes more believable with every win.

Naturally, all ears are perked to hear who will stand across from him in his final bout, and Mayweather himself proclaimed two very underwhelming options.

Andre Berto(30-3, 23KO’s) won out against Josesito Lopez in March to gain the WBA interim welterweight title and trains under the astute eye of Virgil Hunter. He rose to prominence in the late 2000’s as a powerful, athletic puncher, but a lack of defensive acuteness has seen him lose out in brutal affairs against Victor Ortiz, Robert Guerrero and Jesus Soto-Karass. The Karass fight was the last of which played the biggest part in turning Berto into a figure of derision. He is a dangerous yet heavily flawed fighter.

The alternative is Karim Mayfield(19-2, 11KO’s); a 34-year-old light-welterweight whose biggest win was over the oft-shortchanged Mauricio Herrera in 2012. His last win in November was a unanimous decision in an eight-rounder after two successive losses against Thomas Dulorme and Emmanuel Taylor. He is nowhere near the top of his division, let alone in the pound-for-pound discussion.

Both men are solid pros, but they are levels below what we have come to expect from a Mayweather opponent. Nobody has been clamouring to see them go up against the undefeated one, and neither has been setting the world alight in their current form.

Garcia chuckled when Seckbach asked him which of the two is most likely to receive the supporting role in the latest big ‘Money’ blockbuster.

“I think Mayweather made up those names just to fuck around. There’s no way.”

“Next time tell him to mention my name. Fuck it, make me famous.”

The present company, which included the unbeaten Mikey Garcia, echoed his laugh and his sentiment.

Mayweather is a man whose words are heeded to the hilt and it is a very real possibility that he just threw those names out to invoke bewilderment from the watchful media. All of his opponents over the last few years have had either globally recognisable names or a strong partisan support behind them. A tactic that aims to guarantee a profitable return after all the PPV and gate receipts are accounted for.

This red herring will likely be shot down soon enough to make way for the next real challenge.