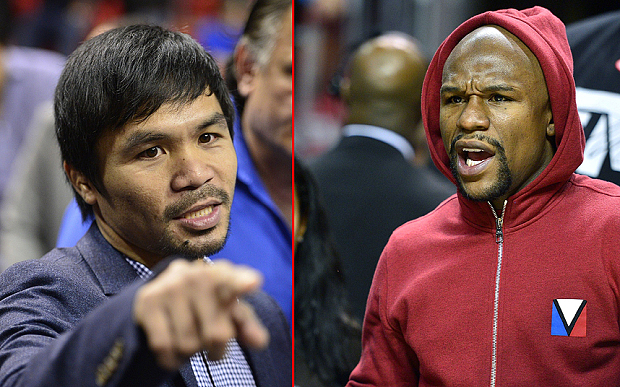 Robert Garcia told FightHype.com that he believes the proposed mega-fight between Floyd Mayweather Jr. and Manny Pacquiao won’t happen. With every day that passes, the likelihood of seeing Mayweather-Pacquiao dwindles.

Most assume that if Mayweather passes on Pacquiao then he will presumably rematch Puerto Rican superstar Miguel Cotto. While Garcia has stated that he, like everyone else, wants to see Mayweather-Pacquiao, a fight, he believes would be exciting, the idea of Mayweather-Cotto is interesting to the high-profile trainer.

There is some dissension amongst fans and media regarding a potential Mayweather-Cotto rematch. It seems like most are dissatisfied with the idea of a rematch, some don’t care, and a small percentage are happy to see it.

The first fight was somewhat competitive, but not nearly as much when put into perspective. It was competitive, but the degree is blown out of proportion when you factor in the Mayweather grading curve.

Cotto did well when comparing his performance to the majority of Mayweather’s opponents, especially at that time. However, the fight wasn’t so competitive or exciting that it warrants a rematch.

Still, the fight isn’t awful, but because fans were so intent on seeing Mayweather-Pacquiao and because they appeared so close to finalizing a deal, at least closer than ever before, a promotion involving anyone else other than Pacquiao will be disappointing by comparison.

There are some newly developed storylines that makes the idea of a Mayweather-Cotto rematch a bit more interesting this time around and Garcia is adamant about one of them.

Since Mayweather defeated Cotto by unanimous decision in 2012, Cotto has won the lineal middleweight title and has rejuvenated his career upon switching trainers to Freddie Roach, Pacquiao’s longtime trainer.

Garcia believes that Roach is a key element for Cotto heading into a potential Mayweather rematch.

“I wouldn’t mind watching [Mayweather-Cotto] because their first fight was close and now Cotto has shown a lot of improvement now that he’s working with Freddie Roach. It might be a different story now. [Cotto] is big, he’s a solid 154 pounder so it would be interesting to see that fight,” Garcia told FightHype.com.

Cotto has grown into a bigger fighter since fighting Floyd the first time, but Freddie Roach told Thaboxingvoice.com a few weeks ago that he doesn’t believe Mayweather will attempt to win Cotto’s middleweight title and instead demand the fight happen with a junior middleweight limit.

Regardless, Garcia giving Roach credit is significant for a few reasons. It wasn’t that long ago when Garcia and Roach were beefing in the media and their rivalry was as strong as ever. However, Garcia is a standup individual with a strong character, and he has always respected Roach’s training abilities. Still,

Garcia didn’t have to credit Roach at all and the fact that he did means he truly believes Cotto is a significantly better fighter now that Freddie is in his corner, but will it be enough against Mayweather?