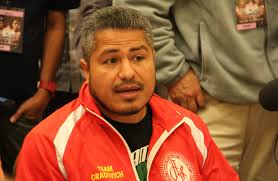 Mike Alvarado has recently found himself in an unfortunate predicament in his hometown of Denver this past weekend. According to The Denver Post, Alvarado was arrested on Saturday on a felony warrant and suspicion of being a convicted felon in possession of a weapon. The police had reportedly found a handgun in his glove box during a traffic stop.

Despite Alvarado’s arrest, his scheduled fight on HBO against Brandon Rios will proceed as planned. Alvarado ended up posting a $41,500 bond and was released shortly after. Many people on social media have criticized Alvarado for being involved in this mess, but esteemed trainer Robert Garcia doesn’t think too much of this situation.

In an ESNEWS interview Garcia stated, “It’s not really that bad,” regarding the Alvarado ordeal. Garcia went on to explain, “I’m a tell you there’s probably 50% of Mexicans with a gun in their car, that doesn’t mean you’re a bad person. A lot of people have guns in their cars. It’s not like he got into a street fight and beat up on two or three people or if he were drunk then that would have been bad news. Another bad thing would be if they find out that gun was involved with some crime, shootings, or something then okay you’re in trouble, but they just found a gun in his car, and a lot of people carry guns.”

This entire situation doesn’t seem to have affected Alvarado’s focus during his training camp, as he continuously posts pictures of himself training on his social media, while not mentioning his incident with the law. The Alvarado-Rios trilogy is set to take place in Bloomfield, Colorado on January 24.