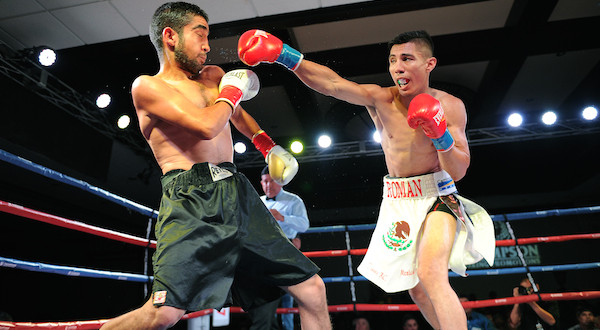 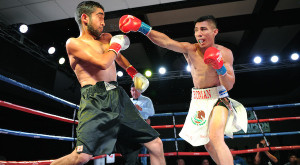 “I dropped him in the second, and from there I was able to settle into a nice rhythm.”

It was a left hook upstairs that downed Lopez. Roman appeared to grow stronger as the fight continued. He consistently landed heavy punches in virtually every round.

Lopez, for his part, countered nicely and backed up Roman on several occasions, but the veteran from Mexico didn’t have enough to win on Friday night from the Doubletree Hotel in Ontario, Calif.

It took heavyweight LaRon Mitchell (8-0, 8 KO’s) about two-and-a-half rounds to figure out Roy McCrary (4-4, 3 KO’s), but once he did, the San Francisco native put his knockout power on full display. Mitchell, who is also a teacher at St. Elizabeth Elementary in Oakland, connected on a combination in the middle of the third round that dropped the heavier McCrary.

McCrary would get up, but Mitchell wasn’t done. With the crowd on its feet and salivating for a knockout, Mitchell put the pressure on and connected with a left to the chin, just before the bell. McCrary crumbled to the floor, and Mitchell went home with a third round knockout win, his eighth in a row.

“I’m getting more and more comfortable in the ring,” Mitchell said. “He was a little bit awkward, but I was able to outmaneuver him and land combinations in the third.”

Junior featherweights Fernando Fuentes (6-5, 1 KO) and Joe Perez (5-4-1, 4 KO’s) entertained the sold out crowd by routinely engaging one another in the middle of the ring.

Fuentes, from Hemet, Calif., touched up Perez to the tune of a unanimous decision win with scores 39-37, and 40-36 twice. Perez was unable to keep a tight guard throughout the fight, which made it easier for Fuentes to find seams and land telling blows.

Opening the “New Blood” card was crowd favorite Humberto Rubalcalva (3-0, 3 KO’s) of Westminster, Calif. He smashed his way to another knockout win. It was Washington native Isaiah Najera (0-1) that took the beating this time.

Rubalcava connected flush with a left hook for the first knockdown. The second was a straight right that spelled the end for Najera. The referee stopped the fight at the 2:36 mark of the first round.

Next up for Thompson Boxing, Darleys Perez (32-1, 20 KOs) defends his WBA World lightweight championship when he meets Anthony Crolla (29-4-2, 11 KOs) in Crolla’s hometown of Manchester, U.K., on Saturday, July 18.

Perez, who is from Colombia, is co-promoted by Thompson Boxing and Gary Shaw Productions.

Later in July, Thompson Boxing returns to the Doubletree Ontario on Friday, July 24. Full details will be announced soon.

“New Blood” was presented by Thompson Boxing Promotions and sponsored by Lucas Oil, in association with LATV Networks.