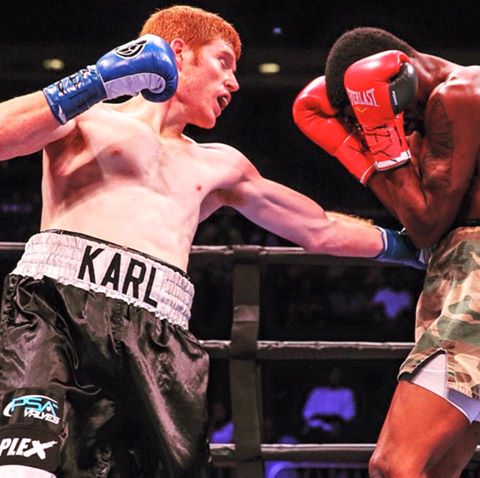 Karl trapped his opponent in the ropes and was able to tee off several times throughout the fight, but his opponent was able to keep Karl from overwhelming him by using a sustained body attack and keeping busy. Olvera was letting his hands go and throwing shots every chance he got. They weren’t hard shots and some of them weren’t even meant to land, but they prevented Karl from getting off anything truly effective.

Olvera was able to create a welt on Karl’s left eye, and he targeted in the beginning of the round 2. Karl turned up the aggression and was landing solid shots on his opponent, even though he had to deal with shots coming back at him, some landing on the back of Karl’s head.

Olvera sized up Karl well, but Karl was naturally smoother with his offense. Still, Karl appeared desperate to take full momentum in the fight, but instead he caught himself reaching with his punches and trying to land anything.

Karl was able to control the tempo of the fight in the 3rd round, landing one of his biggest shots in the process. The talent of Karl was apperent and he was able to place his shots much better. But Olvera had a tank on him and he was able to sustain his output while Karl seemed to tire a bit after every proceeding round.

In the 4th round, “Cowboy” Karl was able to showcase his talents in a more consistent rhythm. He landed hard shots and made his opponent feel the power, which finally slowed Olvera down just a bit. Karl sized Olvera up with some big right hands as well as some hard one-two combinations.

The difference was that Karl was no longer seeking out one big punch and he finally settled down.

Karl made Olvera pay in the 5th round, landing a hard right hand that wobbled his opponent. The punch clearly hurt Olvera and he was forced to take a knee in the process. Cowboy smelt blood and he tried finishing the fight, but as tall as Olvera was he was slick enough to stay out of enough trouble, although he was caught with several big shots to close the round.

It could’ve come down to the final round, and as the 6th commenced, both fighters seemed affected by such a grueling fight. Still, Cowboy was able to utilize his faithful weapon, his power. He landed a handful of rights, one of which knocked out Karl’s mouthpiece.

The fight went the distance and the judges turned in scores of 58-55 and 59-54 twice for “Cowboy” Karl, who might’ve won with wider scores than most expected, but it was still a win. The important part is that Cowboy made fans with his entertaining style.