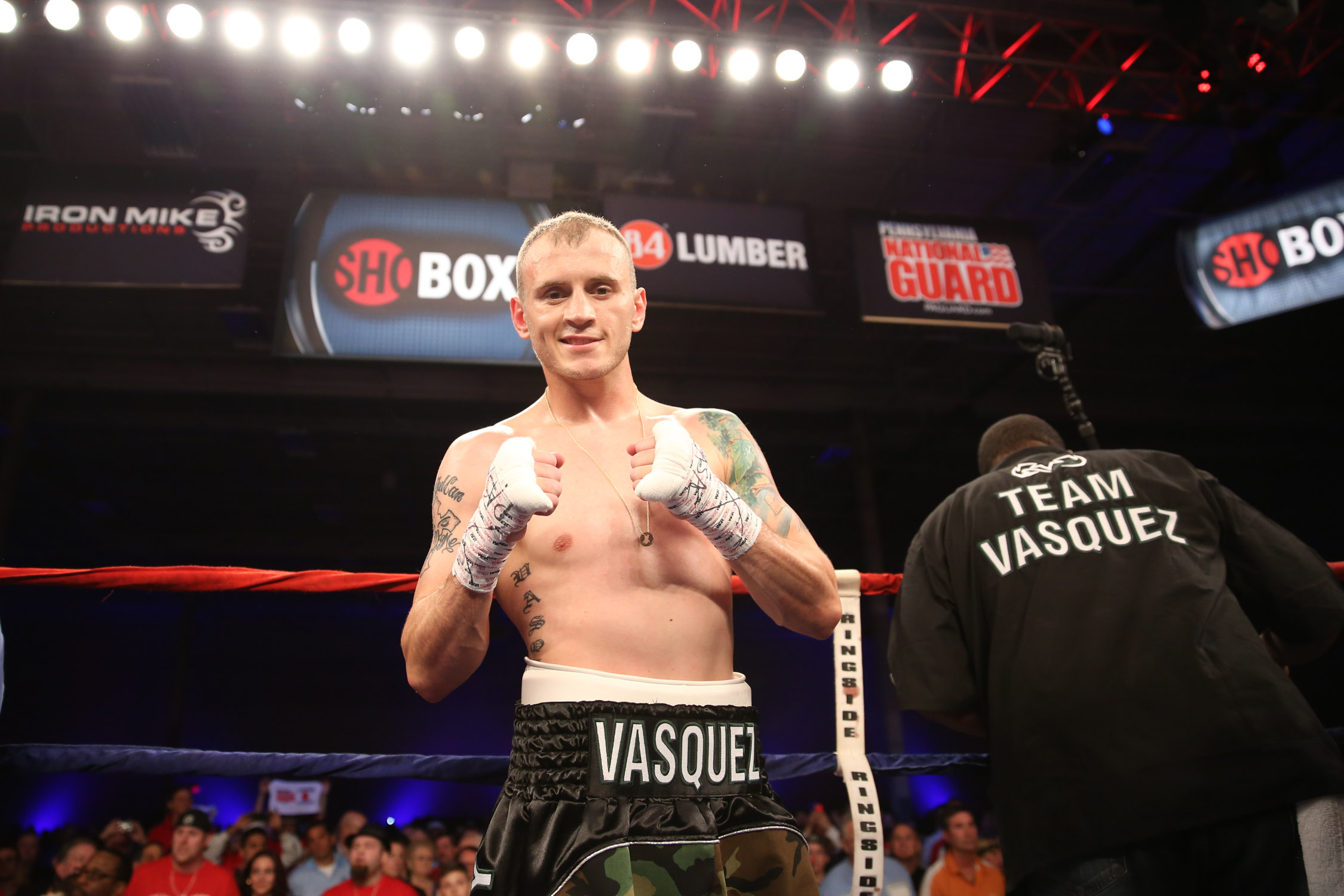 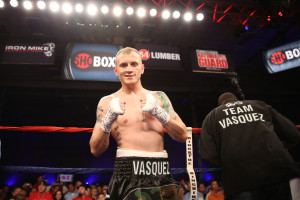 High-energy hometown favorite and unbeaten welterweight Sammy Vasquez Jr. (17-0, 13 KOs) will return to action seeking his 10th consecutive victory by knockout when he takes on fellow southpaw Emmanuel Lartey (17-2, 8 KOs, 1 NC), of Brooklyn, N.Y. by way of Ghana, in the 10-round main event of a ShoBox: The New Generation tripleheader live on SHOWTIME® (10 p.m. ET/PT, delayed on the West Coast) from CONSOL Energy Center in Pittsburgh, Pa.

In the co-feature of the Goossen Promotions event, former longtime Cuban amateur star and current third-ranked WBC light heavyweight Humberto Savigne (12-1, 9 KOs, 1 NC), of Miami via Guantanamo, Cuba, will take on undefeated Craig Baker (15-0, 11 KOs), of Baytown, Texas, in an 8/10-round bout.

In the opening bout of the telecast, talented southpaw and WBA No. 7 ranked featherweight Claudio Marrero (17-1, 13 KOs), of Miami by way of the Dominican Republic, will box an opponent to be announced in an eight-round match.

“We’re honored to present Sammy’s return to action against Lartey,” said Tom Brown of Goossen Promotions. “For decades Western Pennsylvania has produced world champions and some of the boxing’s toughest warriors and Sammy fits right in. He’s really made CONSOL his home. With the tremendous past support from the Pittsburgh area for his fights, we strongly encourage fans to purchase tickets well in advance.”

“We are very excited to once again host hometown hero Sammy Vasquez, Jr., at CONSOL Energy Center as he headlines the feature bout for a terrific professional boxing card on Feb. 20,” said Tim Hassett, CONSOL Energy Center General Manager and Regional VP of AEG Facilities. “The City of Pittsburgh has a rich history and tradition in boxing, and is the center of a region full of enthusiastic sports fans. We are thrilled that Goossen Promotions and SHOWTIME have chosen our venue as the site for this event, and we look forward to all involved enjoying all that our great city has to offer.”

One of the most popular fighters from the area in years, the crowd-pleasing Vasquez, 28, will be making his second ShoBox start and third consecutive appearance at CONSOL Energy Center, where he is coming off two of the finest victories of his promising career.

In his most recent start, the aggressive-minded Vasquez registered an explosive 2:35, first-round knockout over Alberto Mosquera (21-1-2 going in) last Nov. 14. He scored a smashing ninth-round TKO over then-unbeaten James Stevenson (21-0 going in) on Aug. 8. Vasquez dropped Mosquera twice with body shots, Stevenson once.

Vasquez has fought one time past the sixth round. He has never gone more than nine and has won his last nine consecutive fights by knockout. Lartey, conversely, has gone 10 or more rounds five times, never been knocked out and never been knocked down.

“Lartey is a good, tough fighter, and it’s going to be a good fight,” Vasquez said. “I know I’m going to keep my KO streak going. Whether it’s in the first or the 10th, it will happen. He’s never been knocked out, and I like those kinds of challenges.”

In his ShoBox debut, Vasquez scored three knockdowns en route to a 2:49, first-round knockout over Juan Rodriguez Jr. on April 18, 2014, in Monroeville. Pa. Despite all the stoppages, the 5-foot-10 Vasquez never considered himself a knockout puncher.

“I consider myself well-rounded but if the opportunity comes, I take advantage,” Vasquez said. “Whether I am considered by others as a KO or guy or not, I’ll take advantage of the opportunity. I know I could be entering the world rankings soon. But, for now, I don’t really pay attention to them.”

An accomplished amateur (2011 National PAL Championships and 2010 All-Army Championships gold medalist at 152 pounds), Vasquez has been a crowd favorite since turning pro in August 2012. All but three of his fights have taken place in the Pittsburgh area.

“Fighting again at CONSOL Energy Center, the home arena for the Pittsburgh Penguins, is great,” said Vasquez, a United States Army veteran who served two combat tours in Iraq (2005-2006 and 2008-2009) during a nine-year stint as a member of the National Guard. “I am very grateful to be able to headline there and I’m glad to be able to bring attention and publicity to Pittsburgh for the boxing fans to enjoy. I’m happy to bring boxing back and to put on a good show for the city and our area.

“There is no pressure in boxing after some of the things I’ve been through outside of boxing. I always want to win, but win, lose or draw, in boxing you always come out of that ring alive.”

Lartey (pronounced “LAR-tay”), 32, is coming off his most noteworthy victory, a unanimous 10-round decision victory over former world champion Steve Forbes on June 7, 2014 in Tacoma, Wash.

“I’ve faced much tougher competition than Vasquez, and I’m not worried about fighting in his hometown,” Lartey said. “Sammy is a very tough fighter, but so am I. He’s been knocking out a lot of guys, but he hasn’t faced anyone like me.”

In his bout before last, his ShoBox debut, Lartey came up on the wrong end of a hard-fought split eight-round decision to 2008 U.S. Olympic Gold Medalist Felix Diaz.

Three fights ago the game, durable Lartey gave unbeaten rising star and 2012 U.S. Olympian Errol Spence his toughest pro fight, taking him the eight-round distance for the first time. Although clearly behind and seemingly beaten, Lartey landed a body shot near the end of the seventh before rocking Spence with a big right hook late at the bell. Lartey came forward for most of the eighth round, forcing Spence to stand his ground in the final minute of the fight.

“I had a few setbacks and I’m very grateful for this opportunity. This is my time to shine and show the world how good I am.”

The 5-foot-8 Lartey turned pro in April 2005 in Ghana and fought through 2009 there. He was 11-0 with 1 NC – winning the African and Ghanaian super lightweight championships along the way – before moving to the United States and making his stateside debut in February 2011.

This will be the fourth time he’s faced an unbeaten prospect on the road. He is 1-2, losing on points to Diaz in April 2014 and Spence in October 2013 and winning via points against Jonathan Bautista (13-0 going in) in April 2013.

Savigne (pronounced “sa-VEEN-yay”), 34, knocked out former world champion Jeff Lacy in the second round in his last start on July 10, 2014. That upped his record to 10-0 with 1 NC since suffering his lone defeat to underdog Harvey Jolly in December 2009, a fight in which he may have entered with an injured ankle.

A former international amateur standout and a member of the Cuban National team for seven years, Humberto (pronounced “Umberto” – with a silent “H”) made his pro and stateside debut at the late age of 30. Baker represents the fourth undefeated fighter that Savigne has faced as a pro.

“The only thing I know is that Baker is going to go down before the fifth round,” Savigne said. “I’m going in there to knock him out and make it a quick night. I don’t know what he is thinking about me, but I know I’m not underestimating him. I’m going to do my job like I always do. It doesn’t matter what he does. I’ll be ready.

“I’m going to prove that I’m the new don of the light heavyweight division,” said Savigne, who is nicknamed “El Don.”

A natural left-hander, Savigne went 398-23 in the amateurs. He won the national championship four times, and was on the national team for seven years. Savigne defected from Cuba to the United States in April 2009. The 6-foot-1 Savigne, who has fought exclusively in the U.S. since turning pro, has quickly rose to No. 3 in the WBC 175-pound rankings after just 14 professional bouts.

“I feel I was ready for a world title fight since last year,” Savigne said. “I’m looking forward to getting a win on Feb 20 and facing the big names in the light heavyweight division. I’ve been training hard, and I’ve been patient and humble. When the time comes, I’m going to be in prime shape and ready to fulfill my dream of becoming a world champion. Whether it’s early this year, late this year or next year, I’m ready.

“I want to fight the champions at 175 pounds, but I need to take care of Baker first. I want Adonis Stevenson. I feel that I’m better than him. He’s never fought a guy like me, and I don’t see enough skill set in him to be able to defeat me.”

Baker, who turns 31 on Feb. 10, will be making his ShoBox debut. A seven-year-pro, Baker is a pressure fighter who likes to wear down opponents intelligently. He is coming off a third-round knockout over Sergio Cordoba last Nov. 15 in Argentina. He has won his last three fights inside three rounds, but not against fighters on the level of Savigne.

“I’m always the underdog, so this is nothing new,” Baker said. “I’ve been in this position before. You just have to do what you’re supposed to do you’ll get the win. “We’ve been waiting for this opportunity to prove who we are.

“When I win it will mean everything, it will be a dream come true. It’s going to open some doors for me. I’ll be 16-0 and be right there to face some of the top fighters at 175 pounds.”

Baker turned to boxing in 2005 as a way to lose weight. At the time, he weighed 293 pounds. He would lose his amateur debut but then went on to win the Texas State Golden Gloves and the Texas State USA Championships in both 2007 and 2008. Baker was also runner up at the National PAL Tournament in 2007, a quarterfinalist in both the National USA Championships Tournament and the National Golden Gloves, which earned him a USA boxing national ranking of No. 3.

“I’ve faced guys like him before,” Baker said. “At the end of the day, all that matters is what you bring to the ring. On the national level in the amateurs, you can face guys with a few hundred fights on the first day of a tournament. So his amateur pedigree doesn’t scare me.

“I’m just expecting a W anyway it comes. That’s what I want, and that’s what I’m getting. He’s just like any other fighter. You have to wait and see what they have. We’ll find out on fight night.”

Marrero, 25, is no stranger to local fans, having fought twice in the area last year, both times on cards also featuring Vasquez.

An excellent fighter whose only loss came to a tight 12-round decision to Jesus Cuellar in a let-it-all-hang-out, action-packed slugfest for the WBA Interim Featherweight World Championship (scored 114-113, 115-114 and 111-111) in August 2013, Marrero will be making his ShoBox and 2015 debut. He went 3-0 last year, winning by sixth-round TKO over Ira Terry in his most recent start last Nov. 21 in Tulsa, Okla.