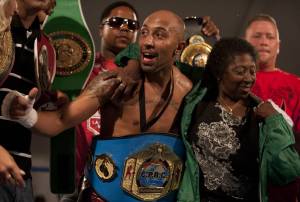 Sampson Lewkowicz of Sampson Boxing is proud to announce the signing of Halifax, Nova Scotia’s Tyson “Prince of Hali” Cave (24-2, 8 KOs) to a promotional agreement.

“It’s a great honor to be joining Sampson’s promotional stable. He works with guys like (former middleweight world champion) Sergio Martinez, and now I’m working with him,” said Cave. “I’ve been working very hard and patiently waiting for the chance to reach my potential. I’m very grateful to Sampson Lewkowicz for investing in me. I won’t disappoint him.”

A flashy, colorful and confident southpaw with excellent speed and movement, Cave says his greatest strength as a fighter is his unpredictability. “The great thing about me is I don’t think I ever know what I’ll do in the ring. I like the cameras and the limelight. I’m flashy. I jump. I come up with unique ways to hit a person and I’m very hard to hit back.”

Cave’s trainer, Bunny Phillips from Titans Boxing Academy in Halifax, says the deal with Sampson Boxing will solve the one problem they have had with Cave’s professional career, thus far.

“The problem with Tyson has always been finding him fights. He makes guys look bad. We’ve been trying to get him fights all over the world and nobody will fight him, so this deal will allow us to let a world-class promoter like Sampson line the fights up for us.”

Robert Cave, Tyson’s father and former promoter, agrees with Phillips that the deal with Sampson Boxing is a good fit and shares his son’s lofty aspirations.

“We are extremely delighted and looking forward to a great relationship. We plan on bringing another world championship to Sampson Boxing.”

Cave is not the shy type. His first fight under the Sampson promotional banner will be against stable mate Oscar Escandon late this year… a fight Cave feels is a bad career move for his opponent.

“To be totally honest, Escandon is lucky to be #2 in the world. He’s done his career the easy way. I’ve done it the hard way. I’m down here in Nova Scotia where nobody’s ever heard of me. He gets these easy fights to build his record up and I’m here grinding. He better learn how to move and be ready for some unbelievable speed. I think he’s flat-footed and it’ll be a big problem for him that night.”

Cave’s chief sparring partner, Dan Trenaman, agrees that Escandon is in for a surprise when the two meet.

“I’ve sparred all over Canada and there’s nobody that moves like Tyson and has his rhythm. He loves to perform and be in front of the crowd. He loves the lights. When your confidence is at 100% like his is, there are no nerves. He’s got that kind of mentality. He’s unpredictable and he’s really become more of a puncher as he’s advanced. He’s really adapted to the pro game.”

Lewkowicz says he’s happy to be able to help Cave’s struggle with inactivity and is looking forward to giving him the chance to prove himself on the world stage.

“Tyson is a very confident fighter,” said Lewkowicz. “He wants the chance to become a world champion and said he needed help landing the fights to get him there. That’s what I will do for him and I have great confidence in his ability to make the most of it.”