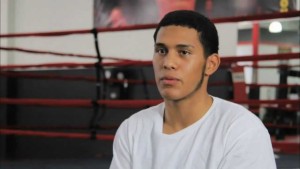 If getting a ringing endorsement from Sampson Boxing promoter Sampson Lewkowicz is the fast track to stardom, then 19-year-old super middleweight prospect David “Red Flag” Benavidez is on it. Lewkowicz has a bit of a keen eye for talent, having helped discover Manny Pacquiao and Sergio Martinez prior to either fighter ever fighting in the United States.

When asked which pupil among Lewkowicz’s current crop of fighters has what it takes to fill the gigantic void created by the retirement of Martinez and imminent retirement of Pacquiao, the 65-year-old veteran promoter didn’t hesitate to answer Anthony Rodriguez of Tha Boxing Voice.

“Everybody knows I discovered Manny Pacquiao and Sergio ‘Maravilla’ Martinez,” Lewkowicz said. “My next one will be David ‘Red Flag’ Benavidez, the younger brother of the champion, Jose Benavidez Jr. He’s 168 pounds, Mexican, bilingual and he can punch. He’s now 13-0 with 12 KOs.”

That’s incredibly lofty praise, indeed. Getting mentioned alongside Hall of Fame names by a boxing mind like Lewkowicz’s means that while Benavidez’s potential is enormous, so is the weight of the expectations placed upon him. Early on in the Benavidez-Sampson Boxing partnership, the teenager wasn’t quite ready to deal with the burden of raised expectations.

“Well, first of all, when I got him — (his) first two fights for me under my banner — Benavidez, he was not a fighter that was 100% dedicated to the sport. And I told him that I would not work with him if he’s not dedicated and giving 100%. I don’t work with 90% fighters.”

But things quickly changed for the better. Benavidez “got it.” Despite his young age, he rapidly matured and learned what it means to be a consummate professional.

“I believe that I got into his heart, and today David ‘Red Flag’ Benavidez is working very hard and is fighting very often,” Lewkowicz said with the tone of a proud father.

“I believe very strongly that before he comes to be 20 years old he will fight for a world title, and we have 11 months to make that happen,” Lewkowicz added.

Benavidez scored a second-round knockout in his last bout against Kevin Cobbs on Jan. 19, and should have another date set in the near future if he truly plans to springboard his way to a world title shot before turning 20. Even if “El Bandera Roja” doesn’t land a world title fight within that optimistic time frame, his future remains as bright as a quasar.