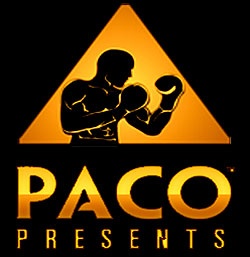 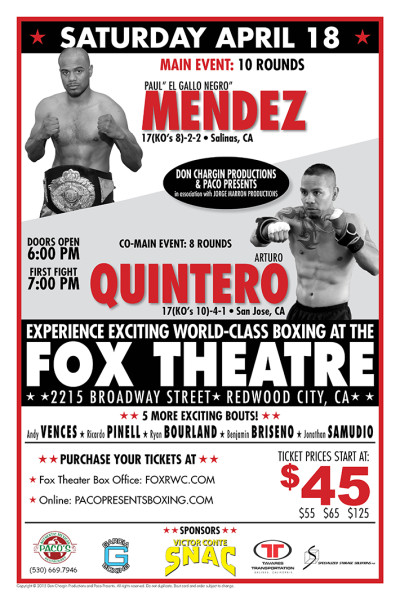 On Saturday, April 18th, Paul “El Gallo Negro” Mendez 17-2-2 (8 KOs) of Salinas, CA will headline the main event in a rematch against Ernesto Berrospe 13-6-0 (8 KOs) of Guadalajara, Mex. Mendez fought Ernesto Berrospe last January in which Berrospe suffered a bicep tendon rupture after the first round making for a short main event; Berrospe will now get his shot at redemption. That being said Mendez is focused on creating the same outcome as his last outing as explained

“I will show him and all my fans that the outcome will be the same. He will lose again this time I am going to do it in a better fashion.”

The co-main event will feature Arturo Quintero 17-4-1 (10 KOs) of San Jose, Ca against Carlos Valenzuela 7-3 (3 KOs) of Ciudad Obregon, Sonora, Mexico. Quintero took time off after he scored a controversial draw against Omar Figueroa Jr. in 2010. It is also that fight that brought him back to the sport as he would like to have another shot at Figueroa at some point in the future. For Quintero, the layoff from the sport means he needs to look good with each performance making this an interesting bout.

On the undercard Andy “The Shark” Vences 10-0 (6 KOs) of San Jose will return after the biggest win of his career a thrilling knockout over tough spoiler Cesar Valenzuela in Cache Creek in Brooks, CA to start the year. Vences is a top prospect in the Bay Area and is looking to pick up another victory as he is hoping to get a major bout before the year’s end.

Ricardo Pinell 10-2-1 (6 KOs) of San Francisco will face Yosmani Abreu after having tough luck in the Boxcino tournament in which his foe missed weight, and a very tough John Thompson outboxed. Pinell is still a young fighter with only 30 amateur fights and 13 in the professional ranks, so for Pinell the ever optimist he is looking at it as a learning experience to know what he needs to do at the next level.

Ryan “Rhino” Bourland 6-0 (3 KO) of Vacaville will rematch Zlatko Ledic, whom he fought in his professional debut. Bourland , who might be the pound for pound hardest worker in the Bay Area as he works by day as a carpenter and trains diligently as a boxer (see his IG Rhino707) by night, truly a blue collar boxer with a strong following and a hell of a punch.

Benjamin Briceno 3-2 of San Leandro, CA will face Adrian Rodriguez of Oakland, CA and Jonathan Zamudio 1-1-2 from San Francisco will also be featured on the card.